Now in its 17th year and called the “Sundance of Latin music”, the LAMC features free concerts at SummerStage in Central Park and Celebrate Brooklyn at Prospect Park, plus intimate private concerts at various venues around the city. The LAMC also includes industry panels with special guests, showcases and other events that are soon to be announced.

Discounted registration is now open at only $99 through May 5th at LatinAlternative.com. 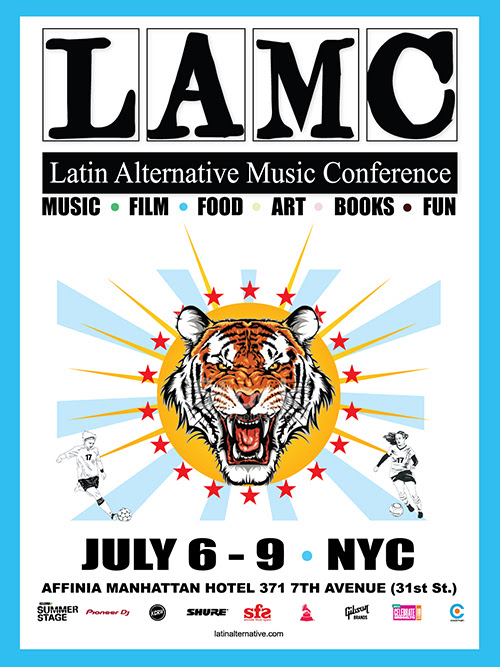 Mexrrissey / Los Cafres / La Dame Blanche
Mexrrissey is a Spanish-language Morrissey tribute comprised of a super-group of Mexican artists spinning Moz’s classics on their heads in a style that band leader Camilo Lara (Mexican Institute of Sound) describes as “mariachi, cumbia, danzon, cha-cha-cha meets Manchester.”   Lara is joined by Ceci Bastida, Chetes and members of Calexico, Moderatto and more.  The band has sold-out tours across the UK and Australia, making waves with their performances stateside where Observer hailed their live show as “one of the best shows I think I’ve ever seen”.

Los Cafres are one of Latin America’s most iconic reggae bands.  Formed in Buenos Aires, the band created their signature sound by combining reggae roots with Spanish-language lyrics.  In their 25-year span, Los Cafres have release 13 albums, each one reaching Gold/Platinum status in Argentina.  In 2013 they received a Latin Grammy nomination for their CD/DVD “Los Cafres – 25 Años de Música”.

Leon Larregui / Rodrigo Amarante / Grenda
Zoé frontman Leon Larregui has built a solid solo career and makes his SummerStage debut at the LAMC in support of his latest album “Voluma”, the follow up to his double-platinum solo debut “Solstis”.  “Voluma is a deep and personal album with songs full of romance, nostalgia and Larregui’s reflections on a new stage in his life and being a father.
Rodrigo Amarante is a Brazilian songwriter and multi-instrumentalist who broke into the international scene in 2008, forming the group Little Joy with Fabrizio Moretti (The Strokes) and Binki Shapiro.  Amarante has shared the stage with a wide array of artists and most recently provided the theme song “Tuyo” for the Netflix series “Narcos”.
17-year-old Eduardo Amezcua, aka Grenda, represents the latest generation of electronic musicians coming out of Tijuana.  Following in the footsteps of his father, Ramon Amezcua (aka Bostich from Nortec Collective), Grenda’s debut full album “Untouchable Skin”, the follow up to his EP “Living Right”, has gotten the attention of tastemaker sites like Remezcla, Rolling Stone and Vice.