The power of Christ doesn’t compel you!

Anyone who has followed the scandal among The Catholic Church is fully aware of how bad its image has been tarnished. Although it hasn’t caused many to look the other way, in some aspects there are a number that have. Of course this horrid outcome isn’t something that needs to be laid on everyone within the organization, but for the most part its sketchy outcome towards the abuse its imposed upon many of its most innocent disciples has opened the world’s eyes, and caused second guessing about just how holy they really are, especially those holding high ranking positions.

Where last year’s SPOTLIGHT (title speaks for itself) presented a true life narrative that followed the Boston Globe’s exposition among the church’s perverse secrets, THE CLUB is a Chilean film that displays those exiled based on their unholy transgressions.

In a secluded house in a small, Chilean, seaside town live four unrelated men and the woman who tends to the house and their needs. All former priests, they have been sent to this quiet exile to purge sins of their pasts, separating them from their communities – the worst form of punishment by the Church. They keep to strict, daily schedules which devoid them of all temptations and spontaneity, each moment a deliberate effort to atone for their wrongdoings. Their fragile stability is disrupted by the arrival of an emissary from the Vatican who seeks to understand the effects of their isolation, and a newly-disgraced housemate. Both bring with them the outside world from which the men have long been removed, and the secrets they thought were deeply buried.

Directed by Pablo Larrain, THE CLUB is yet another deep, dark glance into the evil that lives within the realm of good. A bit of a slow-burn at first, the piece does a great job tackling a complex subject-matter that’ll always haunt Catholics and becomes even harder to swallow as it plays along, leading to an even more disturbing finale that exposes hypocrisy with a religious organization whose disgraceful ingenuity isn’t presenting its causes in black, or white, but more in shades of religious-impunity-grey.

As it runs a gauntlet of individual responsibility, THE CLUB’s most compelling moments are when it cuts to the dirty chase with the priests as they unleash their questionable reasons to immorally justify their acts. All disturbing, their religious calling always serve as band aids to avoid self-destruction, while on the other end of the perverse spectrum, the film also never loses sight upon those priests can victimize by easily preying on. Engaging and quite atmospheric, Larrain’s final product will leave its cinematic mark unlike any other religious-based film to date.

Rough and morally judgmental, THE CLUB is yet another fine piece of art expressing how the shining light of God isn’t always full warmth and smiles. 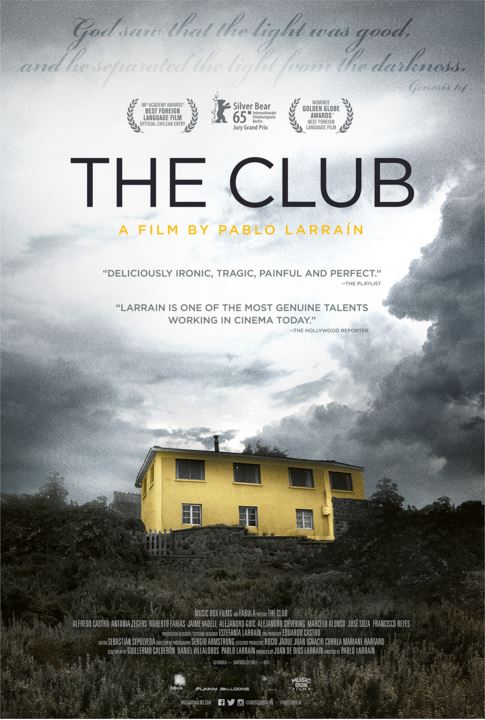