Mark my words, people. As Marvelâ€™s story-lines get bigger and more inclusive of its characters, a point will come where there wonâ€™t be a movie screen big enough to expose all these magical heroes. 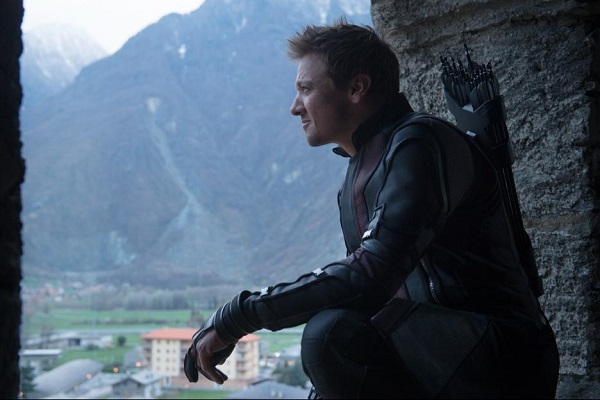 Seven years after IRON MAN rolled its end-credits, the tone after a chat between Nick Fury (Samuel L. Jackson) and Tony â€œIron Manâ€ Stark (Robert Downey, Jr.) struck a nerve. The mindset of what was to come sent chills up my spine, to the top of my head, back down, then off the side of my ass. Holy shit, this is it! An actual AVENGERS movie! I couldnâ€™t wait to see who theyâ€™d tap to work it and how they even planned on tackling such a barbaric piece. The teases were there as time went on. Solo hero flicks were released (all tied into one) and BOOM…there it was! MARVELâ€™S THE AVENGERS landed and the rest is history.

Fast forward to 2015 and now weâ€™ve reached new heights of uncontrollable narratives. With all thatâ€™s gone on since IRON MAN 3 and taking off right where CAPTAIN AMERICA: THE WINTER SOLDIER left off, AVENGERS: AGE OF ULTRON takes us on a journey that exposes Tony Starkâ€™s jumpstart of a dormant peacekeeping program. Once things go inevitably wrong and way out-of-control, Earth’s Mightiest Heroes confront their ultimate test as they battle to save the planet from destruction at the hands of the villainous Ultron (voiced by James Spader).

Less simplistic than its powerful predecessor, 2012â€™s release fulfilled the fantasy for geeks to experience The Avengers in one swoop of fun, cartoonish adrenaline. AGE OF ULTRON takes a turn towards a darker, more serious tone of mankind serving as its own worst enemy, while adding new faces who join fighting for the greater good.

Serving as its common denominator, the world of A.I. (Artificial Intelligence) continues to present that unnerving doubt about whatâ€™s right, wrong and a little in-between in the name of safety and mankindâ€™s evolving process. If thereâ€™s one thing thatâ€™s certain, AGE OF ULTRON subtly presents that true nature among our current society. The reality of humanity as a whole being dark and bleak, especially nowadays where opinions are so polarized and no one knows whatâ€™s truth or spin for manipulation.

The flick sets its mark quick by opening mid-battle, as we see the team crashing a base where twins Wanda (Elizabeth Olsen) and Pietro (Aaron Taylor-Johnson) are being held. Their DNA being scraped by Hydra, weâ€™re roughly introduced to super speedster Quicksilver and a telepathic hottie Scarlet Witch. Or, as someone states: “He’s fast and she’s weird.”

Setting the pace for a story that winds up going in every direction, including one that involves trust, AGE OF ULTRON doesnâ€™t miss a beat when tying its acts together. 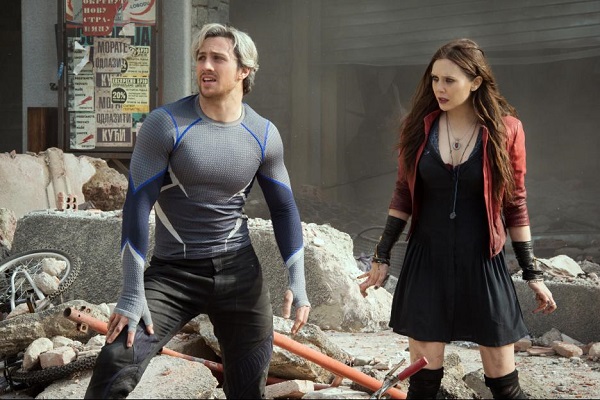 Giving us another perspective from the one weâ€™re use to, although the story generates around Tony Starkâ€™s creation, Thorâ€™s (Chris Hemsworth) God-like footing, and Capt Americaâ€™s (Chris Evans) humble leadership, Whedon gives us more of what we lacked the first time around. This movie is clearly Hawkeyeâ€™s (Jeremy Renner) spotlight in ways that cannot be explained. Followed by Hulk (Mark Ruffalo) and Black Widow (Scarlett Johansson), the element of balance is still here, but clearly outweighed by what some may consider its supporting heroes.

Now with a cast of heroic muscles and brains and power, one can only image the amount of craziness once it leads up to that final showdown. Given to us in spurts throughout the movie, of course each and every single Avenger has lots to chew on as they take bites out of Ultronâ€™s fury. What elevates these cinematic clashes of visual beauty is Whedonâ€™s balance when exposing us to the groupâ€™s dynamics. Of which again, circle and expose a lot more of Hawkeye, Hulk and Black Widow.

Ultronâ€™s game plan for destruction is pretty menacing and kind of echoed what we saw in the first movie. Thereâ€™s a lot of intimidation factor that goes into this villainâ€™s work. However, there is a set-back. His build-up was a bit of a stumble. I wanted more of Ultron. Although he lacks Lokiâ€™s charismatic, bad-guy charm, heâ€™s extremely visceral in such a brainy way. Correct me if I’m wrong, but intelligence should overpower muscle. Subtly stealing any scene he’s in, at times it felt Ultron needed a more substantial presence. Instead, he seems to blend into the background and rushed. The same downfall can be addressed with Vision. Once he’s established as a powerful source, they breeze right through him as well. Pleasant to watch, but not enough time to grow as a character.

If anything, a minor drawback compared to what goes down throughout the story. AGE OF ULTRON doesn’t necessarily suffer from that dreaded “S-word” curse. It’s a massive movie full of darkness and clearly leads us into an intergalactic outcome.Â  It gets noisy and at times a bit overbearing, defining it as a cinematic version of an all-you-can-eat buffet. But thatâ€™s part of the fun and why we love these blockbuster flicks.

Sure, it may generate questions of whatâ€™s to come as it ends ambiguously, but fear not, my friends. Remember, there’s Marvelâ€™s ever-so-famous post credit scene that provides a cool answer.