From its start as a TV show in the 60s, MISSION: IMPOSSIBLE has always centered on the extreme pressure of a ticking clock. A death-defying deadline to stop plots of catastrophic proportions. Morphed into a film, the idea has gorged into a movie-making phenomenon that amplifies the pressure on Ethan Hunt (Tom Cruise), the man always tangled in a web of complexities whose bravery is vital in successfully pulling off his missions.

Itâ€™s something the film franchise has been executing since its blockbusting numbers that started two decades ago. In each film, the team led by Cruise (who also produces), has unveiled ways to match, then elevate, audiencesâ€™ expectations in unique ways.

ROGUE NATION takes the art of MISSION: IMPOSSIBLEâ€™S espionage glam to new, deceiving heights. The agency known as The IMF has been under severe fire, but now it faces total destruction, even as the worst threat yet known to the free world lies deep within the shadows of its own darkened existence. That threat is The Syundicat, an extremely astute, untouchable, tactically-trained group of elite renegade spies who have left behind their countries for an agenda of their own. A band of merciless menaces that make ISIS seem like playground bullies. The Syndicate has long been rumored to be just an urban legend among spies. But Ethan Hunt has just uncovered the unwelcoming reality that this rogue nation is not only real, but a ticking time-bomb about to unleash worldwide atrocities if he doesnâ€™t act. The CIA thinks itâ€™s bullshit and with his own team under threat, Ethan will never give up on the highest mission ever agreed upon.

Whether on Austrian sidewalks, or Moroccan sand, running across the wings of a plane, or deep, aquatic dives… Tom Cruise’s star-swag is heavy and beyond appealing as he reprises his now globally adored role. Reuniting his old-school crew (Jeremy Renner, Simon Pegg and Ving Rahmes), along with a couple of new faces (Rebecca Ferguson (keep an eye on her) and Alec Baldwin), ROUGE NATION is a cat-and-mouse chase of exciting, adrenaline-ridden experiences. Along with a narrative full of twists and turns, while the previous in the series (GHOST PROTOCOL) presented Hunt transforming from a loner to a team leader, now heâ€™s forced to hone in on his newly acquired leadership skills under uncertain scenarios. One that practically has him going against his evil, darker self.

Thereâ€™s lots in this movie that grips oneâ€™s interest. Quite frankly, this mayhem of thrills keeps its finger on a pulsating reality that there doesnâ€™t seem to be a stop at where MISSION movies can go. That, in part, is due to the variety of directors who have tackled MISSION movies and left their creative mark. ROGUE NATION is directed by writer Christopher McQuarrie (EDGE OF TOMORROW, X-MEN, THE USUAL SUSPECTS) whose visionary style of story-telling happens to be fun and unique. Meshing comedy, drama, action, and the mystique of suspense, the ante is raised and perhaps will leave a feeling of maybe this being the best of the MISSION movies. Thatâ€™s a matter of personal taste and style, but one cannot deny the franchise has earned its respect and branded one of the best in its own right, as well as solidifying that even in his 50s, Tom Cruise IS without doubt one of the best action-heroes to bless the art of adventure.

As one of 2015â€™s summer joys full of fantastic spectacles, if one isnâ€™t entertained by a drawn out opera with chaos as its visual interpretation, or car chases that morph into motorcycle chases, I donâ€™t know what say other than loosen up a bit. Thatâ€™s what this movie is all about â€“ entertaining on levels uncommon to oneâ€™s abilities. 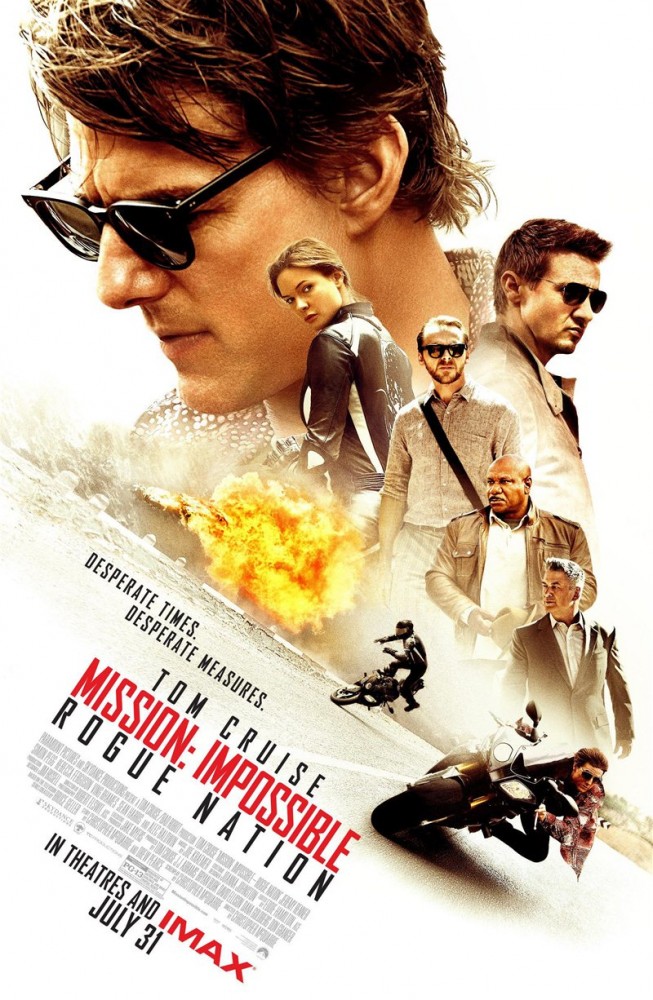