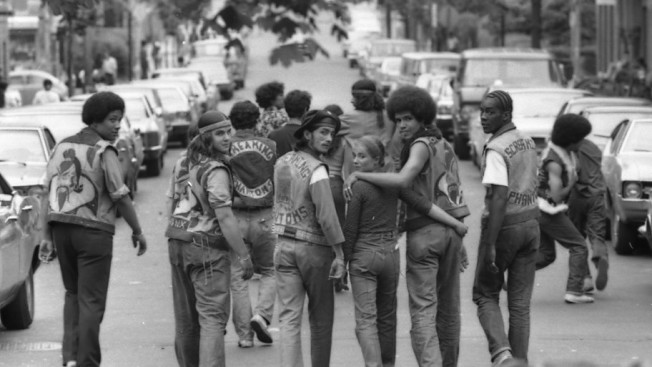 While I can admit that I was a very young child during the time when this was occurring, I do remember all the burned down and demolished apartment buildings that were all around me while we lived in 180th and Vyce. Granted I was maybe 5-9 years old if I remember correctly, it was a dangerous place to grow up. I lived with my grandparents during that time and remember going sometimes to the sewing factory where she worked and having to pass by the Chingaling bike club. I always thought on how scary they looked.

As we moved around, left the state, returned and moved to different parts of the Bronx, you can see the change occurring. Where burnt apartment buildings once stood, you can see new buildings full of life. Rubble Kings walks you through the beginning of the gangs of NYC inner city in the 60, 70’s and beyond.

From The Savage Skulls. The Black Spades. The Ghetto Brothers. The Deadly Bachelors. Javelin. The Dirty Ones. The Tomahawks, they were all accounted for in this documentary. The story revolves around a gang turned club called “The Ghetto Brothers” with the founder and leader; “Yellow Benjy” offering first hand accounts on what life was like at that time and how his actions and the actions of people around him affected a whole city.

The documentary, Directed by Shan Nicholson, Executive Produced by Jim Carey, Narrated by John Leguizamo, took more than 8 years to complete, painstaking searches for archival footage that spanned the globe is a masterful tapestry of good and bad during that time.

Rubble Kings was released on-demand and shown in select theaters comes as gang violence is once again on the rise in the city especially in places like Chicago.

The film is a gritty reminder of what once was and where some cities are headed to. One simple decision can have an effect that can create a tidal wave of chaos around everyone. Violence is a butterfly effect.

This decision came at the heels of Cornell “Black Benjie” Benjamin’s murder in In 1971. Back then, Black Benjie was the peace ambassador of the Ghetto Brothers was murdered trying to diffuse a looming battle of gangs. After this an all out gang war inevitably. It wasn’t until words of wisdom by someone not involved in the gang offered their advice.

Those simple words birthed an miraculous and unlikely peace treaty between all the crews in the borough and ushered in a new era of multi-gang collectives being able to party and enjoy themselves inadvertently giving the rise to what would be known as Hip-Hop.

Check out some pics from the Rubble Kings NYC Premier at Times Square: