Finally, THE ROCK… HAS COME BACK… To save the day!

Once again teaming up with CENTRAL INTELLIGENCE (2016) director, Rawson Marshall Thurber, Dwayne Johnson continues his unstoppable silver screen streak. No matter how you felt, JUMANI: WELCOME THE JUNGLE and RAMPAGE were films not many thought much of at first, and in the end wound up being pretty decent and successful. A little over-the-top, but fun and entertaining and engaging and charming and everything else that defines a great time at the movies. That said, SKYSCRAPER is no different. And thank God this was built on solid Rock! Otherwise, this structure would have imploded.

Back as FBI Hostage Rescue Team leader and U.S. war veteran, Johnson stars as Will Sawyer. With government gruntness in his past, he now manages security for skyscrapers. On assignment in Hong Kong, he takes on a challenge of overseeing the tallest, high-tech, safest building in the world known as The Pearl. Through happenings at the hands of malicious intent, he suddenly finds the structure ablaze, and to make matters worse, he’s been framed for it. A wanted man on the run, Will has to find those responsible, clear his name, and lastly, somehow rescue his family who are trapped inside the building… Above the fire line!

For what it’s worth, it was fun in its own overkill, idiotic way. Lots of cinematic genepool here. SKYSCRAPER is a hybrid of TOWERING INFERNO (1974) and DIE HARD (1988) – and that’s part of the fun! At its core, it’s a flick about family and extreme measures to protect. Lather it up with spectacular visuals, death-defying stunts, radical action sequences, tough-guy jargon, then sprinkle a little Dwayne Johnson and you’ve got a blockbuster. A highrise of adventures that requires no brain at all. Pure escapism for an hour and forty-three minutes.

This isn’t the type of movie one goes for substance. There’s really nothing here that encompasses the art of film. Character build-up? Out the window. (Well, maybe 5 minutes of it) Plot? Yeah, right. Story structure? Who cares? Relatability or sympathy for the characters? That was a joke! Performances? No need for it. In the end, this is nothing more than a feel-good, popcorn piece. You cheer those you like and cringe for those you don’t. Kinda like a wrestling match. (No pun!) However, I’d be a liar if I said I didn’t enjoy it. (Or the crowd I screened it with.) It is, to a degree, a cool flick in its own dysfunctional way. Good thing is it doesn’t take itself serious. The story knows its narrative outweighs anything remotely close to plausibility.

Dwayne Johnson IS a movie star. The dude shines no matter how low his level of acting may be. This one by far the worse of any performances I’ve ever seen. But you enjoy his aura. All you wanna do is cheer him on. I’m telling you, if The Force were real, this guy would be visual definition for it. He does what he does best in SKYSCRAPER: show up, charm, kick-ass, repeat… So much, his supporting cast didn’t generate a bit of importance. I mean, sure they serve a purpose. Chin Han is the reason why The Pearl exists and why Johnson is where he is. Then there’s the villains. Without them, what purpose would a hero serve or have? I mean, a hero is only as good or relevant as his/her enemies. SKYSCRAPER has a bad bunch of brutes that serve as the backbone to this mishmash of a movie. Neve Campbell and the kids are there for motivation, Hong Kong officials are around to assume and misinterpret everything. Blend it all together and you have a collage of who knows what the fuck, but you stick with it. It’s a thrilling joyride. Overall, it’s entertaining. If you’ve seen the trailer you’ll know what it is and what it’ll feel like. That said, Yee pee kay yay, mofos! 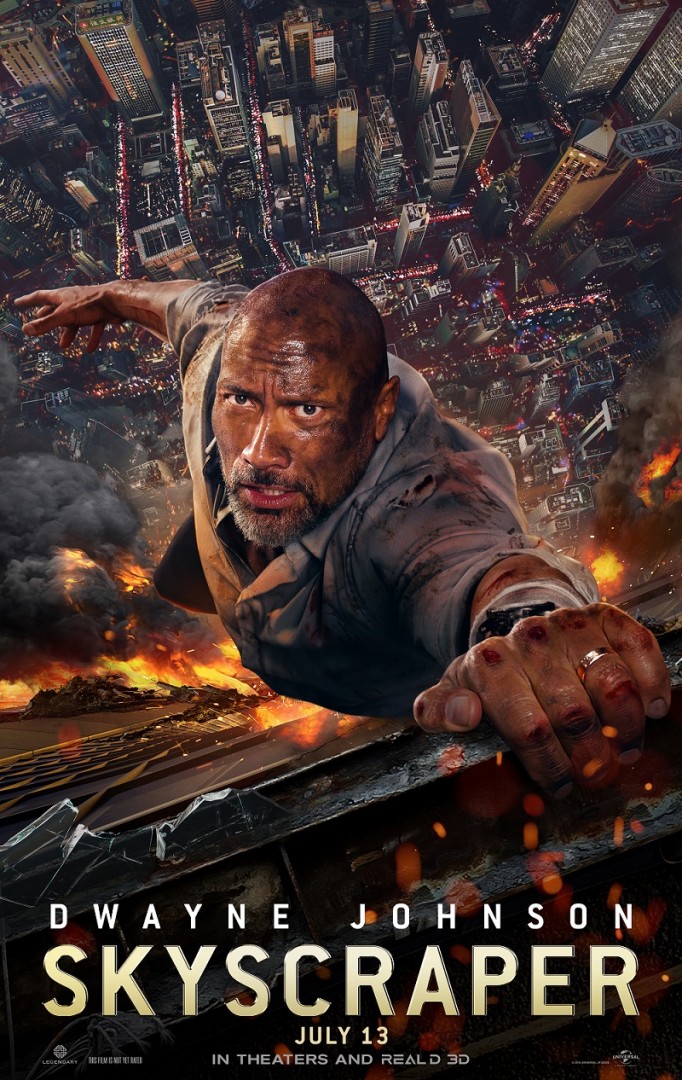