Much like everyone else, when major, historic events take place anywhere in the world (especially in your own back yard), you’ll always remember where you were, what you were doing, what was your first reaction, who was the first person you spoke to, etc. Seeing as I come from a city with a pretty shitty history pertaining to planes, that very day had us all at ease. While working, “A plane just crash-landed on the Hudson,” were the exact words my friend Fio text me, whose job window faces the river. I immediately stopped working, word started to get out in the office, we went over to the conference room flat-screen and the rest is history.

With much that followed after the rescue, all sorts of specials started airing thereafter and it was inevitable Hollywood would tap into those goods. Who got to tackle it? Clint Eastwood. Who gets to play the hero? Tom Hanks. We saw what he was able to do as Capt. Phillips (another disaster film that deals with him in trouble while navigating a large body of water), now we get to see him as Capt. Chesley “Sully” Sullenberger. The man behind the “Miracle on the Hudson.” The remarkable, quick-thinking pilot who glided his disabled plane onto the frigid waters of NYC’s Hudson River on January 15, 2009, saving the lives of all 155 on board. However, while Capt. Sully was being praised by the public and the media for his unprecedented feat of aviation skills, what most didn’t know was that there was an on-going investigation. One that threatened to destroy his reputation and his career – and that’s what SULLY’s all about!

That said. Seriously, can Tom Hanks do no wrong? Once again we embrace his talents as we witness his transformation into yet another figurehead that can be considered a hero. The emotional ride at the hands of Clint Eastwood’s filmmaking allows you to relive the “Miracle on the Hudson” by placing you in and out of the plane, flight and other heart-pounding experiences that grip your soul. Spearheaded by Capt. Sully as he transformed what would have been a tragedy into a heroic twist, the film is designed to praise the work of a man that could have ended in a much more horrid way. Mashed up in form that simultaneously follows both the incident while heavily investigating it, the film is a piece that also displays the fine line of questions between right, wrong, life and death. For some it may seem as if Eastwood is applauding Sully rather than telling a story, but truth is the heartbeat of this film lies within the engaging exposure of human triumph. Straight forward and geared as a crowd-pleaser, SULLY lands quite smoothly.

Co-starring Aaron Eckhart as “Capt. Skiles” and Mike O’Malley as National Transportation Safety Board (NTSB) investigator, “Charles Porter,” SULLY has its decent performances when its focal point isn’t on Hanks. Are there moments where the film flies at low altitude, sure, but it’s out shined for what the real purpose of the film is about… Hanks and pretty decent CGI of a plane landing on the Hudson, which is done quite a few times and looked really cool in IMAX.

There is a line in the film that stood out and made everyone in the audience gasp: “It’s been a while since NY has had good news. Especially with a plane.” That got me thinking… It’s pretty ballsy for WB to be releasing a film about a NYC-based plane incident the weekend of 9/11. I’m sure it’s pure coincidence, but it’ll be interesting to see and/or hear if NYers will go out and watch. For what it’s worth, I think they should. This is a decent, compelling piece of work that exposes the best in humanity. 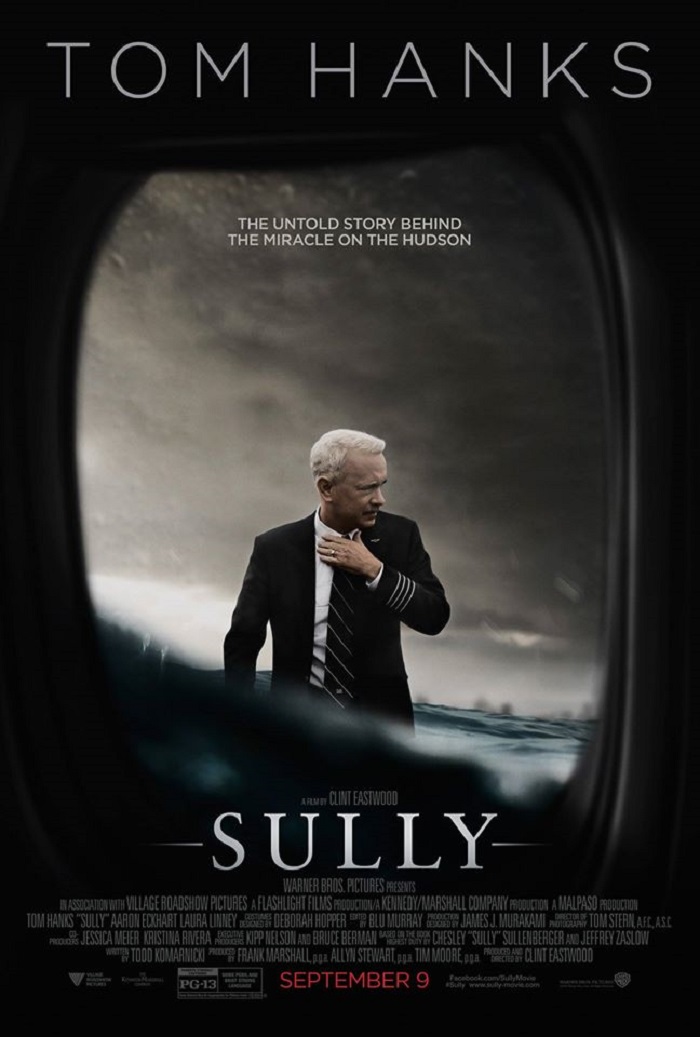