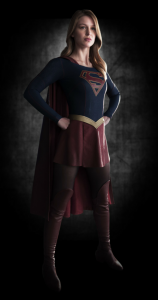 Last week the world saw a bird, no a plane, no they saw a SUPER girl take flight and SOAR onto their television screens as the series premiere of the CBS action drama Supergirl debuted.  So how did she do on her maiden voyage?  Supergirl’s premiere was a ratings darling as she boasted the largest ratings premiere of the the new fall shows this season.  It doesn’t hurt that the studio invested a whopping 11 million dollars into the series pilot.  11 what?  YES you read that right, 11 million dollars.  Though a pricey cost, it was a bold and ambitious move well worth the money.  Why?  The series pilot had to show viewers the potential that this newly risen heroine (and cousin of Superman) could do (like the plane rescue sequence for one).

The premiere unfolds showing a baby Kal-El being sent to Earth by his parents before their home planet Krypton explodes.  What we learn is that his older cousin Kara Zor-El (she’s 13) was also sent to Earth to protect him, but when Krypton exploded, a shockwave knocked Kara’s pod off coarse and hurtled it into the phantom zone (where the criminals are sent).  24 years pass before some unexplained occurrence sets her pod loose and onward to Earth.  When her pod was freed, Krypton’s maximum security prison Fort Roz (which was also in the phantom zone) crash lands on Earth and the villains locked within escape.

Kal-El, now 24, has taken up the moniker of Superman.  All grown up and in no need of being protected , Kara decides to adapt to humanity and live a normal live.  11 years later we find Kara Danvers (Melissa Benoist of Fox’s Glee) working as a personal assistant to media magnate Kat Grant (Calista Flockhart).  When her adopted sister Alex (Chyler Leigh of Grey’s Anatomy) ends up on a plane that’s suffers engine failure, Kara races into the sky to save the plane, ultimately embracing her destiny.  That act of heroism reveals to the world that another hero lives amoung and thus Supergirl is born.

As the newly minted heroine begins taking down every day bad guys, she gets the attention of a NASTY villain with a connection to her past.  But when the  two meet up and go toe to toe, the girl of steel gets her ass handed to her and learns the hard way that she’s not as indestructible as she thought.  With the help of some unexpected allies, Supergirl rises to the occasion and thwarts her stronger adversary.  If the pilot is any indication of what producers have planned for the series, I’m on board  for the ride and can not wait to see what adventures the girl from Krypton gets into.  The next episode of Supergirl airs tonight at 8pm on CBS, check your local listings for channel information.