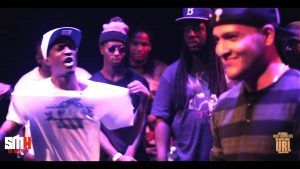 Battle rap has always been part of the hiphop culture. Even when I was “rapping” there were always battles.Â  From just walking corner to corner to see who was rapping and battling on the spot verse for verse or starting a cypher that turned into a battle, this IS what hiphop is all about. It’s the purest form. So now in a scene where Latino battle rappers are seldom I want to shed some light on one individual who for the last couple of years has managed to become one of my favorite battle rappers out.Â  His humor and wit have always been his strongest asset but in this world of the URL you need BARS! and this; Uno La Voz’s first time on the Smack URL main stage, he brought both his humor and wit along with an Arsenal of Bars. Get it? Arsenal and bars? you can’t spell B-A-R-S without putting that ARS in it.Â  well anyway, check out Uno La Voz; in my opinion, dismantle Young X!