On Saturday, December 1, 2018 the rumbling waters of NYC’s East River were sending signals about a massive surprise. It was a message something big was about to hit the island of Manhattan. Toughened carelessness provokes NYers to do what they do best: shrug it off! In doing so, they fell victim to a tidal wave beyond their expectations. As Mother Nature’s hydro-force crashed onto the streets of the Financial District, it became apparent it was a force inhabitants of this metropolis had never experienced. Hitting hard and washing away anything and anyone in its path, inevitably the rugged waters of the East River recede. But the wash away didn’t go without bearing gifts. Much to the surprise of those who miraculously survived the aquatic ordeal, their eyes rest on an image left standing.  In full majestic garb, the image of a man becomes obvious. Not just any man, an individual with a unique style. One with a powerful presence. To no one’s knowledge, as they stand and gasp for breath, they’re completely oblivious they’re being blessed by the presence of Aquaman! Little did they know the king of all things oceanic was stopping by to attend his upcoming film’s press conference. Yes, he could have kept it simple and flown in, but with such swag, why not do it in full Aquaman style.

Many of us followed through as we’re granted access to this once-in-a-lifetime extravaganza, and once within the confines of downtown’s Four Seasons, it was a setting that calmed the masses as they sat in (myself included), participated and embraced a press conference that not only displayed the man himself, Jason Momoa, but also the backbone to the storyline’s exposition with Amber Heard and Patrick Wilson. Spearheaded by director James Wan to add just a bit more to the event, it was a thirty-minute tsunami which was ridden on by a surfboard of heightened enthusiasm.

As Aquaman’s press conference set sail, the event’s undertow submerges those covering the event with general curiosity about the project. It was an “absolute joy” says James Wan. “Surreal,” he follows up with when breaking down his overall feelings for an iconic hero that although a badass in his own right, suffered criticism for many decades. And why Jason Momoa? Wan makes it clear Momoa was the man he had a vision for. “What I love about working with Jason wasn’t just bringing his personality to the character and not bringing him to Aquaman, but bringing Aquaman to him, that’s what I loved most about it. I get to showcase the other side of Jason Momoa that not many people have seen. The fun and funny side of him.” Wan’s aquatic ambitions were high and mighty when manning this ship on rough waters. “It’s a movie made with a lot of love. Made with a lot of passion. I respect the source. The material,” says Wan who emphasizes it being a love letter to the cause and those devoted to it.

On the flipside, Jason Momoa’s reactions towards the character was quite surprising. “I thought I’d be playing a villain,” says Momoa when first getting wind he’d be part of a production dedicated to one of the world’s most iconic superhero duos known as the Justice League. “When Zack Snyder first told me, I wish I would have had a picture of my face. When he explained it to me, it was such an honor and Zack’s perspective on it was just so radical… and what it offered to the team of Justice League was something we hadn’t seen. It’s a beautiful hero’s journey. I’m very lucky for Zack for coming up with the idea, and very, very lucky for James for showcasing something that is more than just a weekend in Aquaman’s and Arthur’s life of Justice League.”

When he first saw himself in full Aquaman attire, “I FaceTime’d my kids. Their eyes were blown away. It was a beautiful moment,” says Momoa. Whose full acceptance and realization of being cast as the hero finally set in deeply while shooting Justice League. “I was sitting in a Bat-Mobile staring at Affleck and Wonder Woman and it was the coolest thing ever.”

The overall feeling about the production from everyone else was just as beautiful and enjoyable to listen to. It was a moment with as much magic as the movie itself, which was a lot of fun and in theaters everywhere December 21! In the meantime, listen up for more from James and Jason, as well as Amber Heard (Mera) and Patrick Wilson (Orm) below. The entire thirty-minute press conference can be heard to its full, uncut capacity. Enjoy! 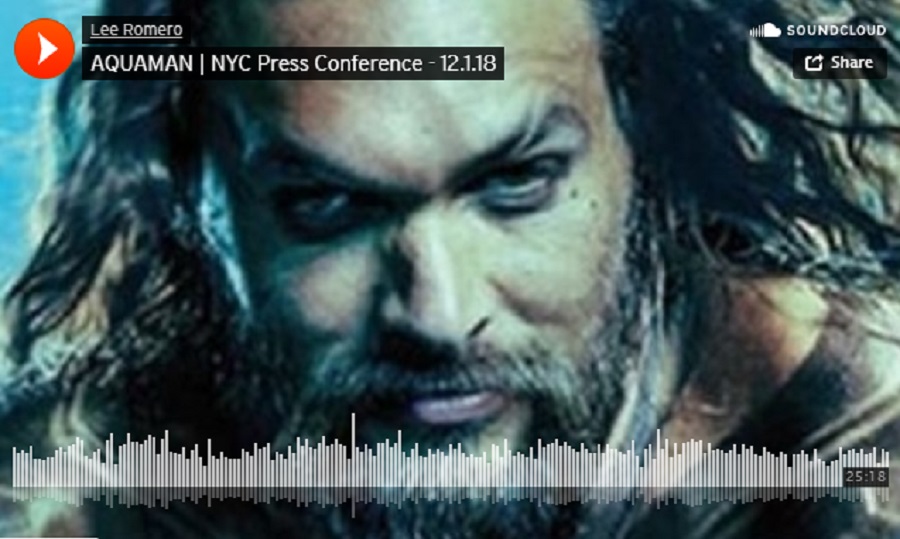