Directors Ari Issler’s and Ben Snyder’s “11:55” – a harsh drama centered around a welcoming return of US Marine Nelson Sanchez (Victor Almanzar) to his hometown stops abruptly when he finds himself trapped by the violent past he had tried to escape – is a thought-provoking piece of cinematic art.

It’s a simple, subtle look inside a realm of many realities. It’s a perfect example of uneven footing towards redemption. It’s rough, rugged, and raw. The cryptic countdown approach among the plot keeps one on the edge of insanity. It reflects upon the reality of the streets, while gripping upon your psyche as each key character exposes their affect and reactions as they become aware of Nelson’s situation.

The backbone and machine that keeps this gripping story going is its fine cast. The film stars Victor Almanzar, Elizabeth Rodriguez, David Zayas, Julia Stiles, John Leguizamo, and last-but-not-least Shirley Rumierk. Playing the role of “Livvy” (Nelson’s girlfriend), Ms. Rumierk’s solid performance hijacks your mind, body, and soul. Taking you along her roller-coaster ride of emotions, her portrayal of a woman in distress for the one she loves leaps off the screen. Fierce and fearless, Ms. Rumierk comes full circle as she lives through the narrative one emotion at a time.

Lucky for me, I was able to have a chat with the talented lady and able to pick her brain regarding her role, the overall experience shooting “11:55,” and what she hopes audiences take away from the film. Not only was it a charm to chat with Ms. Rumierk, but very educational in terms of her approach with the film. 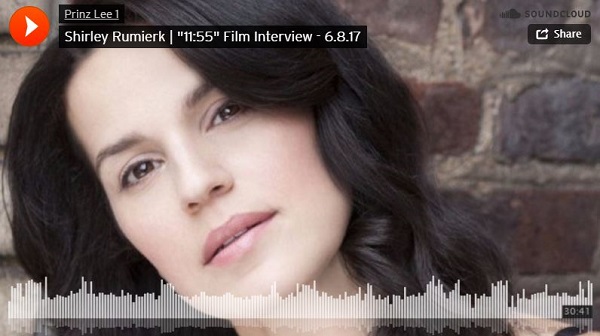