“For many reasons it’s important for this film to be seen,” says Gilbert Saldivar about his latest project SHINE, starring alongside David Zayas and Jorge Burgos. Saldivar, a professional dancer whose shared the stage with heavyweight, female pop-artists such as J-Lo, Madonna, Katy Perry, and most currently (as we speak) Christina Aguilar, has conquered the world of rhythm and now seeking to dig his claws of talent upon the world of cinema.

Having history with SHINE director Anthony Nardolillo, Gilbert Saldivar was exposed, drawn to the overall scope and powerful story behind the project, and immediately brought on board to participate in what is a solid stand-out performance. But it doesn’t stop there, because his performance is also exposed among a title that will resonate among Latino communities throughout the country fighting the good fight due to the inevitable dreaded G word: Gentrification.

An “emotional warrior,” is how Saldivar defines his character of Junior. A modern-day community hero whose objectives display a man who is “carrying his neighborhood on his back,” Saldivar follows up as much of the character lives within himself in many ways. One being a man who is currently partaking in the same kind of good deeds when it comes to trying to keep his hometown of Houston from drifting away and into the upsetting side of gentrification.

As a strong Latino man, the “struggles I’ve faced,” as he explained, were the same that have always existed in a business riddled with hypocritical unity, while catering to the same ugliness that exists outside its doors. “Dirty myself for my headshots,” recalls Saldivar as a low-blow comment that clearly shines the light of discrimination that presents the harsh realities of Latinos still having trouble being viewed or displayed in a positive way.

Gilbert Saldivar is a brilliant, talented, charismatic and raw Latino artist who will definitely break those barriers of biases. SHINE may be the project to start creating cracks on that wall. It’s more than just a film about community and familial bond, but also a story about will and the strength of possibilities for Latinos hold their own and be viewed on a much more positive light, like being “heads of corporations.”

It didn’t come easy for Saldivar. “It was rough. I grew up dancing cumbia.” However, “I had an amazing teacher Charlie Garcia, a phenomenal salsa dancer.” Someone who didn’t allow Saldivar to take any shortcuts. From start to finish, his dedication to the cause and craft comes off flawless in the film. Much of that of course is due to his costars of David Zayas and Jorge Burgos. Two of the films leads whose meshing with Gilbert flowed well. “The second that the 3 of us stopped into a scene together, it felt natural.” And natural it did feel.

As a whole, the casting of Gilbert Saldivar in a film that aims at exposing the power of unity and community, will be one that hopefully will “burn all color barriers,” especially among an artform known as Salsa, one of the major soulful and cultural experiences in the film that serves as its own character.

My full, uncut interview with Gilbert Saldivar can heard below. In it he opens more about his life and most of all, the film. 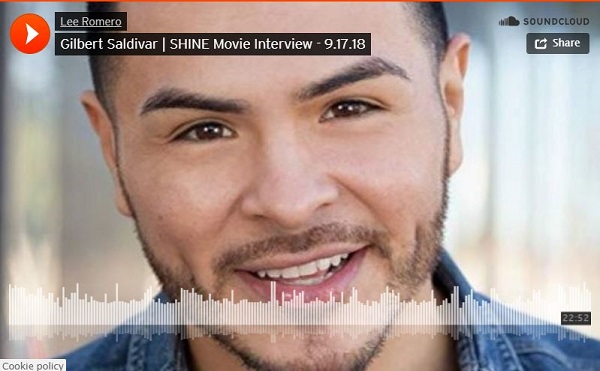