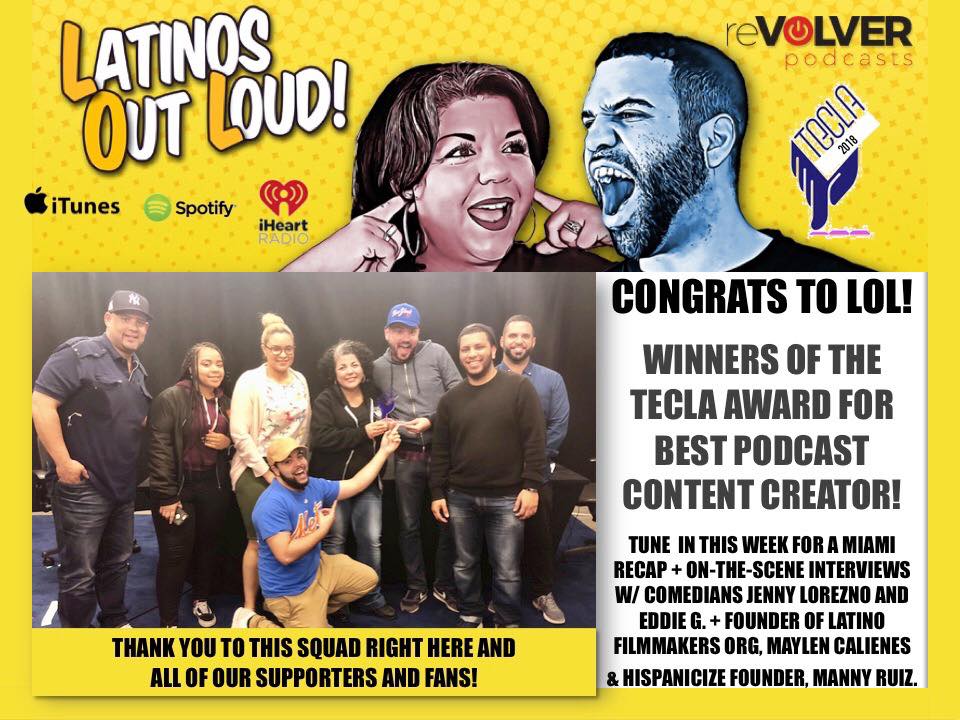 On Episode 17 of the new season on ReVolver, the crew recaps their trip to Miami where Rachel La Loca, Juan Bago and Frank represented for the LOL squad and brought home the Tecla trophy for Best Podcast Content Creators! The crew describes that moment when Latinos Out Loud was announced as the winner (SPOILER ALERT: RACHEL WAS AN EMOTIONAL MESS). There is no Miami story left untold: from the wardrobe malfunction that caused everyone to be late for the red carpet, to the play-by-play of Rachel and Juan’s acceptance speeches, to Frank snoring up a storm in the condo. Bago roasts and boasts about the nightmarish dining experiences they witnessed and Rachel tells us which old school Latino musician slapped Bago across the chest in the street. On this week’s “Bochinche Bites”, Jaime breaks down Kanye West’s epic return to Twitter, gets mildly excited about the new Fast and Furious animated series, freaks out about Lil’ Wayne’s threat to his fans, and quizzes Bago on his marathon prep. “Frankspiracy News” covers the Malaysian government cracking down on fake news and we all wonder what will happen to Frank if this starts happening in the United States. Former co-host and current West Coast Correspondent of the podcast Andrew Santiago calls in and updates us on all the things he is up to as a content creator for MiTú and comedian at UCB Sunset in La La Land. We also have exclusive on-the-scene interviews recorded live at the Tecla Awards at Hispanicize with Comedians Jenny Lorenzo, Eddie G., Hispanicize founder Manny Ruiz and the founder of the Latino Filmmakers Network, Maylen Calienes.