"A force that didn’t seem all that woke | SOLO: A Star Wars Story – Review"

“I think you just can’t bear to let a gorgeous guy like me out of your sight.”

Truer words have never been spoken. The charm. The charisma. The authenticity. The appeal of a handsome, witty, scoundrel whose maverick ways captivated audiences since the very first day. Introduced to the world by one of Hollywood’s most prestigious franchises, “Han Solo” morphed into one of the most iconic, beloved characters in cinematic history. Part of it due to writing, and the other due to the man playing the role — Harrison Ford! Who owned it! And owned it well. Living up to his ways for the last three decades, it’s a no-brainer an original Star Wars story can be spun. He’s an action hero. And why not now seeing as the Star Wars hoopla is at an all-time high, right? Well, obsession prevailed, and the rest is history.

So much has gone on since the production of this film. (It’s all online. I’m not getting into it.) Through its seesaw of production, it only begged one question: Why? Seriously, do/did we need a Han Solo film? That can be argued till we’re blue in the face, and the fact is it’s subjective. Now that it’s here, it’s here to stay. Directed by Ron Howard and written by Lawrence and Jonathan Kasdan, SOLO takes its audience into an adventure (prior to joining the Rebellion) of a dark, criminal underworld, where Han Solo’s origins take place. Through his process of sketchy survival, he meets his future copilot Chewbacca (Joonas Suotamo) and crosses paths with Lando Calrissian (Donald Glover).

If there’s one thing this film accomplished that no other film has… It’s having made me leave the theater with lots of thought-bubbles. I was puzzled. SOLO: A Star Wars story played off more like SOLO: A YOLO Experience! If Kathleen Kennedy (lead producer) thinks this piece serves as a foundation for a trilogy, she’s most definitely abusing California’s new weed, legalization law. Don’t get me wrong, I didn’t hate the film. There are elements that stand out, demands your attention, and wind up enjoyable. But it’s far from a Star Wars spectacle. For starters, there’s only ONE Han Solo — Harrison Ford! Not that Ehrenreich was a wreck. He held his own and worked the role to the best of his abilities… But was I taken or mesmerized by him? No. So much, I honestly have no intentions in watching him again within the Star Wars mythology.

While the film makes use of its protagonist, the lead-up to what finally gets to complete Han Solo as we know him felt generic, with lousy build-up. I felt absolutely no sentimental value as a fan of the franchise. From landing his “Solo” name, to Chewbacca’s nick name, being introduced to the Millennium Falcon, exposition of the villain pulling the strings (a cameo), etc.… It was all flat. Comedic and disrespectful to the core of the story, if I may add. As a fast-paced, galactic adventure most of its promising scenes come via action-sequences. Fun to watch, the action scenes in the film aren’t bad, as well as the cinematography. Gorgeous visuals that ride along a rugged appeal that matches characters’ style and look as it moved from one cut to the next.

Speaking of characters, Glover as Lando had solid swag and charisma. (Enjoyed him.) Clarke annoyed me (although gorgeous to watch), and Bettany was SO underused. Now… Harrelson… He stood out. I don’t know what it was about his role as Tobias Beckett, but it stood firm in a class all on its own. His role needed some more flesh though. So, these are also aspects of SOLO that made it watchable for me. The flick is fun & flawed at the same time. I can’t rain on Howard’s parade. I like his films. I’m a fan. He did what he could considering the shaky building blocks SOLO had to deal with. It’s not a bad a piece. However, it’s the weakest of the series, I believe. People think THE LAST JEDI has problems? Wait till they endure 2-hours and 15-minutes of a what’s clearly a forced-franchise-flick that never really needed to happen.

There’s good, bad, and ugly when it comes to SOLO. I, for one, have enjoyed what Disney’s done with Star Wars. But… This is a slip. ROGUE ONE it is not. Will it fail? No. This will make money, but it’ll also simultaneously start to raise eye-brows regarding a supposed galaxy with so much to offer, yet seemingly coming off a bit smaller as it inadvertently relies on established characters to keep moving. This may be the turning point and start of Star Wars fatigue! Something I bet will occur way before comic book movie fatigue… But I’m only one person. As I said, it’s subjective. 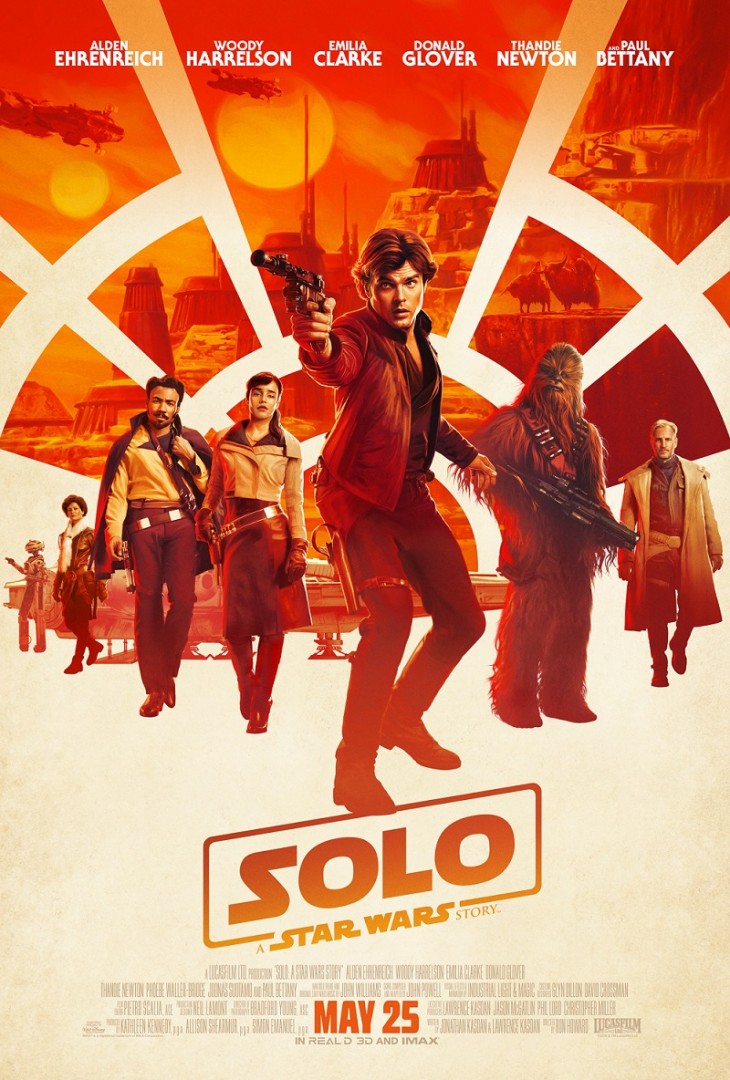