"A Nine year old’s outlook on her #Alopecia" 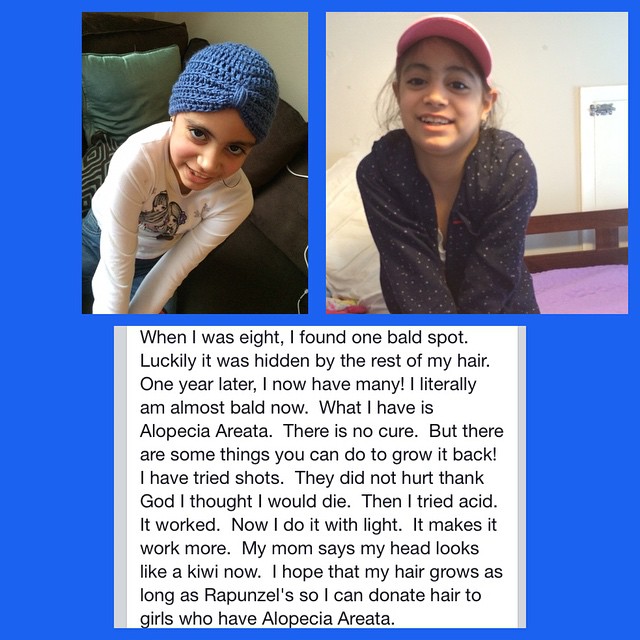 Catherine is my step-daughter and today she wrote one of the most powerful and selfless things I have ever seen written by a 9 year old. I won’t write too much about how amazing she is, but these are her words.

When I was eight, I found one bald spot. Luckily it was hidden by the rest of my hair. One year later, I now have many! I literally am almost bald now. What I have is Alopecia Areata. There is no cure. But there are some things you can do to grow it back! I have tried shots. They did not hurt thank God I thought I would die. Then I tried acid. It worked. Now I do it with light. It makes it work more. My mom says my head looks like a kiwi now. I hope that my hair grows as long as Rapunzel’s so I can donate hair to girls who have Alopecia Areata.

What is Alopecia Areata
Alopecia areata (AA) is an autoimmune disease in which hair is lost from some or all areas of the body, usually from the scalp due to the body’s failure to recognize “self” and destroys its own tissue as if it were an invader. Because it causes bald spots on the scalp, especially in the first stages, it is sometimes called spot baldness. In 1â€“2% of cases, the condition can spread to the entire scalp (alopecia totalis) or to the entire epidermis (alopecia universalis). Conditions resembling AA, and having a similar cause, occur also in other species.