For starters, we definitely learn something new every single day. According to my press notes, the follow-up to 2012’s “Wreck-It-Ralph” marks the first animated feature sequel from Disney Animation Studios since 2000’s “Fantasia 2000,” which was a sequel to 1940’s “Fantasia.” The only other sequel is 1990’s “The Rescuers Down Under.” Interesting…!

OK, Truth-be-told, when “Wreck-It Ralph” first hit my radar, I didn’t know what to expect. The only thing I knew that was solid about it was the studio behind it. Disney’s known for introducing some of the most iconic animated characters to date, along with features that support a strong structure of story that allowed them to be global icons and national treasures. “Wreck-It” hit, and hit hard. I was surprised at how much I enjoyed it and was blown away by its nostalgic effect seeing as I grew up in the 80s exposed to everything laid out in the film. It was mind, body and soul kind of a charm.

Six years later, Disney brings Ralph back to the big screen with “Ralph Breaks the Internet.” In “Ralph Breaks the Internet,” video-game baddy Ralph (voiced by John C. Reilly) and best friend Vanellope von Schweetz (voiced by Sarah Silverman) leave the comforts of Litwak’s arcade in an attempt to save her game, Sugar Rush. Their quest takes them to the vast, uncharted world of the internet where they rely on citizens of the internet (a/k/a Netizens) to help navigate their way. Lending a virtual hand are Yesss (voiced by Taraji P. Henson), the head algorithm and the heart and soul of the trend-making site “BuzzzTube,” and Shank (voiced by Gal Gadot), a tough-as-nails driver from a gritty online auto-racing game called Slaughter Race, a place Vanellope wholeheartedly embraces so much Ralph starts to worry he may lose the only friend he’s ever had.

To be honest, the film is a net-based rabbit-hole of fun. There aren’t enough words to describe how much I enjoyed watching Ralph being Ralph AGAIN. He doesn’t “Wreck-It” in “Breaks the Internet,” he killed-it! Much like its predecessor did with 80s-themed video games, this film is a delightful animated feature that makes good use of the internet genre, while creating an enjoyable world of its own. It’s a world-wide-web of entangled chaos yet fun adventures. It introduces new characters that weigh in at about just as evenly enjoyable as its leads, cameos from various Disney worlds with hilarities based on inside, film jokes and has enough balance for both children and adults to enjoy as it plays along a script that surfs the internet in the exact same way we do. It’s brilliant, bright and beautiful! Kudos to Ralph – a bad-guy we all hate to love! 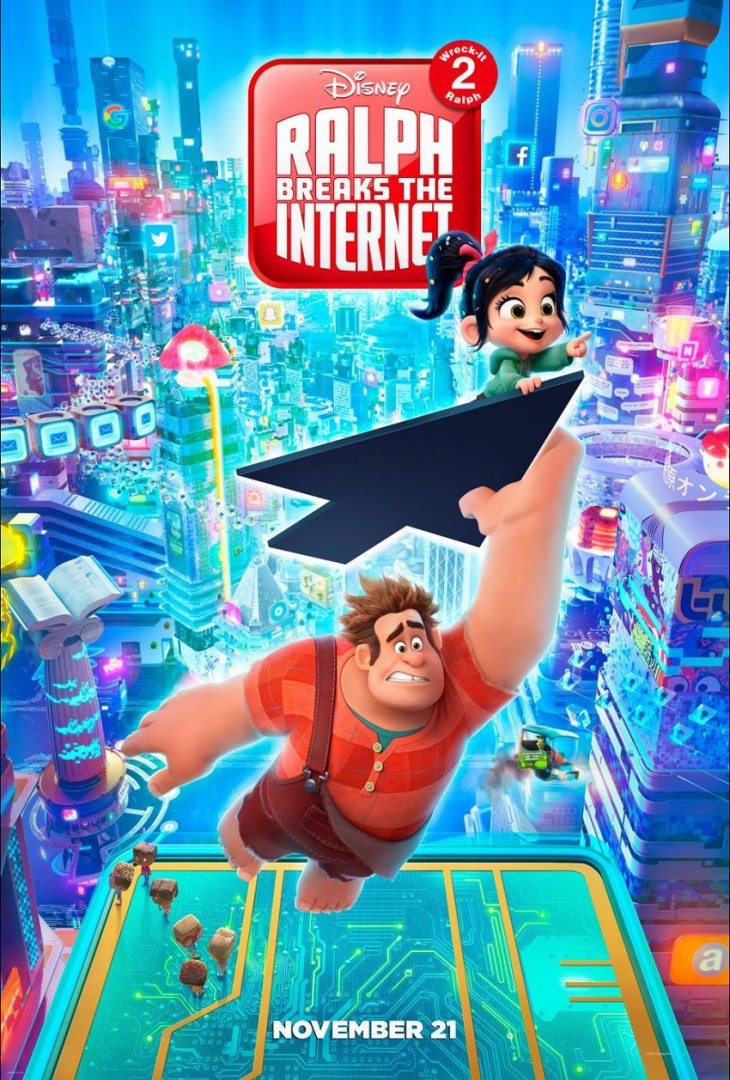