After a terrible virus decimates human civilization, Ann (Lucy Walters) finds herself living alone in a forest, foraging for supplies, and accompanied only by a radio broadcasting in French. Very few animals exist – and those that do, seem to be infected and have worked up a taste for human flesh. If that’s not bad enough, adding to her complex existence in a solitary world of uncertainty comes during a moment where she comes across two more survivors, Chris (Adam David Thompson) and Olivia (Gina Piersanti), who wind up raising her hazardous stakes.

We’ve seen this before. It’s I AM LEGEND (’07) and 28 DAYS LATER (’02), sprinkled with just a tad of AMC’s THE WALKING DEAD, only on a lower budget. Exposed with very little dialog (well at least the first half), and presented more with a “girl power” angle, this ultimate survival flick has something to offer. It’s its own “it factor.” Although a stomach-clenching thriller at times, HERE ALONE is less about the threat itself than the people who are surviving it. For Ann, killing the infected is an easier outlook on life than connecting with her new companions in a world where fellow man can be just as (dare I say, even more) dangerous. 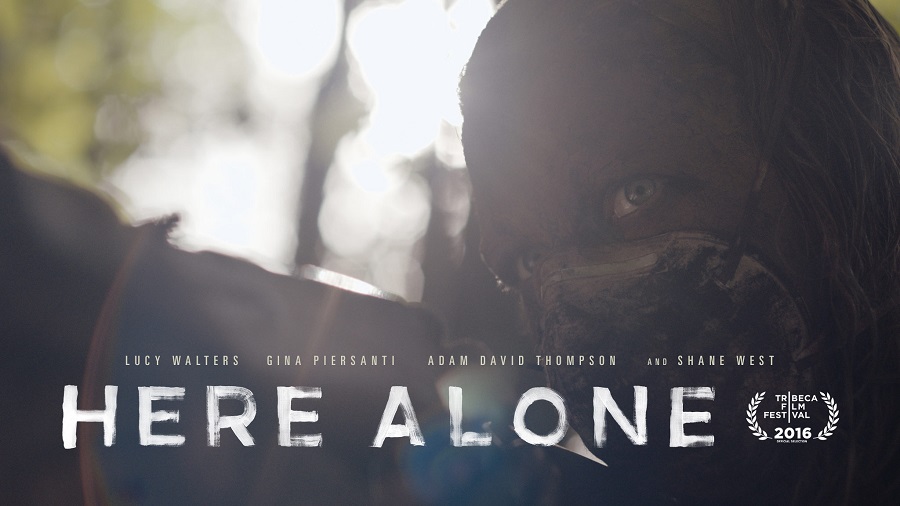