One of the most famous Lucha Libre wrestlers of all time stepped in the ring for the first time in 1942. 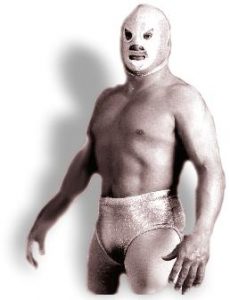 The Silver-masked, El Santo enthralled audiences with his secrecy and mystique and over five decades became a national hero. His appearances in movies and comic books further labelled him as a symbol of justice. Born Rodolfo Guzman Huerta the Mexican masked wrestler, icon, and film actor retired in September 1982. He made his debut in the comic book by Jose G, Cruz in 1952 and in the same year was offered the lead role in a motion picture called The Man in the Silver Mask. His decline disappointed fans, however; he did accept two other lead roles in 1958. Continuing his wrestling career and incorporating his acting career, El Santo made a big impression in 1961 as superhero. He portrayed a professional wrestler, which he was, that moonlights as superhero, in the movie called, Santo vs. The Zombies.

If you are one of millions of WWE fans under the impression that only the World Wrestling Entertainment has superstars that turn to the film industry, such as John Cena, Hulk Hogan, The Rock and more, think again. None of them has ever completed 52 successful motion movies as well as comic books and other media appearances. In one of the most financially successful films he made he costarred with Mil Mascaras and Blue Demon with Mexicans considering this one of the best ever Luchador films in history.

The legendary Blue Demon, Alejandro Munoz Moreno who made his debut a few years after el Santo in March 1948, also retired years after El Santo, in 1989. Also making a massive impact in the history of Mexico, the Blue Demon with his legendary Blue Mask had his first encounter with El Santo in 1952. Blue Demon who held the championship until 1958 defeated the famous El Santo, who was the NWA World Welterweight Champion in 1952 and 1953. The two famous wrestlers remained rivals although they also featured in Mexican films together. In 1961 Blue Demon appeared in one of his first ever Mexican films, an overall of 25 films, nine of which he costarred with his rival El Santo. The producer of most of El Santoâ€™s movies was ready to cultivate yet another wrestler cum movie star with Blue demon who also continued his wrestling career until his retirement. 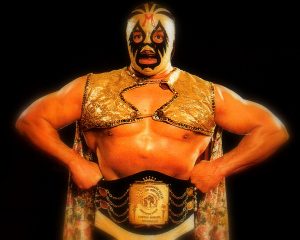 Another Mexican wrestler who is part of the original Mexican Lucha Libre â€œBig Threeâ€ is Aaron Rodriquez aka Mil Mascaras. Making his debut in July 1965, his is recognized worldwide as one of Lucha Libreâ€™s most influential wrestlers. The Lucha Libre style was popularized and enhanced by this wrestler, who also has an amazing 20 movies behind his name. A true Mexican icon, he is a cultural ambassador and accomplished artist and appeared on three of Mexicoâ€™s postage stamps.

He is part of a world known and prominent Mexican wrestling family. His two brothers are Pablo and Jose and most of you have heard of the WWE wrestler Alberto Del Rio, who is the son of Mil Mascarasâ€™ brother, Jose. One of the greatest honors to be bestowed on a wrestler is the WWE Hall of Fame and the Professional Wrestling Hall of Fame Induction. Mil Mascaras was honored by both those organizations with inductions in 2010 and 2012 respectively.

He made his international debut in Los Angeles at the Olympic Auditorium in 1968 against American greats such as Black Gordman, John Tolos, Ernie Ladd, and Goliath. At the WWF, which is now called WWE he performed several times through the years until he won his title Mexican WWA World Heavyweight Championship at the age of 49. That was during the 1991 fight and this title he holds until today. In 1966, Mil Mascaras starred in his first Luchador film of which he completed 19 altogether while remaining a wrestler. The very same producer who turned El Santo and Blue Demon into movie superstars took serious notice of this famous wrestler. El Santo left the producer due to a contractual dispute, Blue Diamond was injured, and this was the opportunity for Luis Enrique Vergara to transform yet another newcomer. A true Mexican icon who made an impression on the world, Mil Mascaras took part in a Tokyo Event in December 2013, with team mate Don Caras and won the Tokyo World Tag Team Championship.