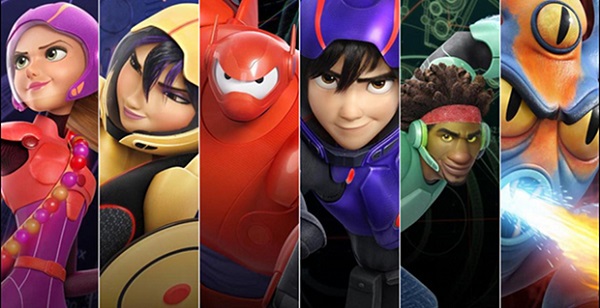 BIG HERO 6 is an action-packed comedy-adventure about robotics prodigy Hiro Hamada (Ryan Potter), who learns to harness his genius-thanks to his brilliant brother Tadashi (Daniel Henney) and their like-minded friends: adrenaline junkie Go Go Tamago (Jamie Chung), neatnik Wasabi (Damon Wayans, Jr.), chemistry whiz Honey Lemon (Genesis Rodriguez) and fanboy Fred (T.J. Miller). When a devastating turn of events catapults them into the midst of a dangerous plot unfolding in the streets of San Fransokyo, Hiro turns to his closest companion-a robot named Baymax-and transforms the group into a band of high-tech heroes determined to solve the mystery.

Never ceasing to amaze with their artistic abilities, Disney is the type of studio that keeps delivering with some of the most vibrant characters and stories to ever be translated on screen. Their latestâ€¦ an obscure Marvel comic most (if not all) of us were oblivious to. Thatâ€™s of course unless youâ€™re a die-hard-geek type, but whether thatâ€™s the case or not, BIG HERO 6 presents comic-book-based action-packed delights with a core that stems from the bond between Hiro and Baymax that warms oneâ€™s heart as the film unveils a beloved journey when meshing both souls.

Introducing a set of fresh new characters set upon a fun, futuristic world full of charming chaos, BIG HERO 6 takes you on an adventure filled with colorful outcomes and brilliant settings. Cute to its core with a unique style, BIG HERO 6 continues to remind us why we love and perhaps can relate to some of the characters Disney always introduces. Going from one artsy, cutesy end to some that may seem a bit â€œdefiantâ€ and a little bit risky; this new animated-comedy-hero-flick is a charm to watch. Laced with lots of pleasant surprises (one entailing a new animated short to set things off titled FEAST), this gorgeous piece is the best animated feature this year, and truly one to own in the future.

For added pleasure, Disney once again granted me access to some of the stars of BIG HERO 6 to share thoughts, experiences, and overall excitement with the project!