Look! I’m not going to lie and say I’m a “huge fan” of the Teen Titans. How I was SO waiting for their movie. I’ve always been aware of them, but they always seemed kinda meh. My memories of Teen Titans goes back to my youngest nephew (then about 5 or 6) watching them on TV and how brief their episodes were. I recall how it was a bunch of odd-looking, kiddie-type characters running around looking like DC superheroes. (Of course, later I find out it’s a DC product.) It was nutty, very colorful, and extremely fast-paced. Never in my wildest dreams did I think my sporadic exposure to this show would one day wind up a feature. A feature!? Out of that!? How!? I mean… Whatever! Life’s indeed full of surprises.

And now… Adopted for the big screen… Cartoon Network’s “Teen Titans GO!” not only is designed to be a lot bigger and longer, but as tongue-and-cheek, as well. “Teen Titans GO! To The Movies” is a superhero movie for the whole family. It is also the brainchild of the same team that creates the wildly popular half-hour series.

In this quick and crazy journey for the Titans, Robin learns that the story of Batman’s greatest ally and best friend in the world is coming to the big screen. However, it is not about him. So, bugged about Hollywood making movies about every superhero, but him, Robin declares it’s time they make one. But then he’s hit with the cold, hard reality: Hollywood only makes movies about real heroes. Wondering why he and the Titans aren’t taken seriously, maybe it’s because a hero must save more than…room for dessert? Embarking on a journey of heroism-for-Hollywood, Robin and the Titans are stumped by a malicious masterplan at the hands of Slade. A villain that presents complicated obstacles for them, their reputation, and most of all… Robin’s Hollywood dream!

“Teen Titans GO! To The Movies” turned out to be a lot more fun than I expected. I really, really enjoyed this movie. It’s cute, funny, simple and silly! Silly humor (as always) has/is my cup-o-tea, and even more when it’s animated. And knowing this joy came from a product I least expected made me appreciate it even more. It’s a quick story on the lighter side to all the superhero hoopla. It brings levity to the whole darker side of superhero flicks, while presenting the idea of just accepting yourself. (Good one for the kids!)

The best thing about this piece is how open and carefree it is yet, witty and self-aware of its objectives. Brilliant jabs and gags at both comic-book companies (including a running joke with a famous figure-head), DC’s movies, and the film industry. It really gave it to Hollywood and its corrupt workings in a cute way. There’s plenty here for kids and adults to share. One joke goes real far. It was the best, as it was so unexpected and threw adults off a bit, especially for those who were parents with their kids in the crowd. Gasps at the screening I attended. It was the best and got the biggest pop!

Overall, “Teen Titans GO! To The Movies” is as vibrant and colorful as the TV show. One cannot go wrong with this piece. I expected nothing walking in, and walked out feeling joy. One more thing… Stay through the credits! *wink* 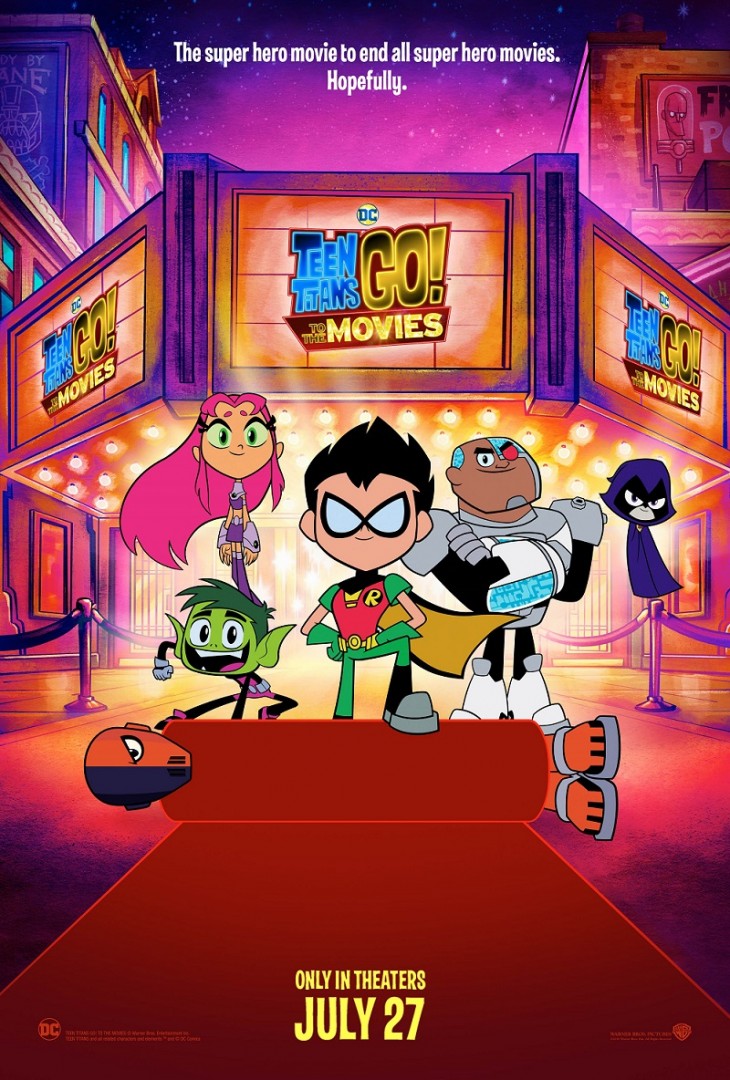