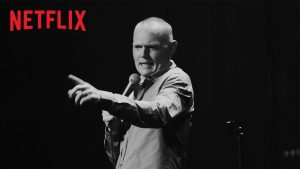 I really can’t remember when I first stumbled upon the highly funny man that is Bill Burr. But I was instantly drawn to his sarcastic wit and in your face comedy. He instantly became one of my favorite comedians alongside people like Louis C.K (which I thank for putting his specials for purchase for only $5 on his site) , and Patrice O’niel; RIP.

His new special “I’m Sorry You Feel That Way” is his fourth special via Netflix.

This time around its the same Bill Burr. In your face, sarcastic, twists in the jokes and overall laugh out loud comedy. From discussing how it’s impossible for your wife to be able to kick you out of bed to how the nfl draft is ridiculous.

My personal favorite part of this comedy special is his bit on adopting a child that’s impoverished. That his personal “first round pick” would be the same child that sowed the shirt he was wearing. Hahaha.

Now if you are sensitive about you comedy or like the fluffy stuff, this is not for you. He is vulgar, sexist and anti-dumb shit.