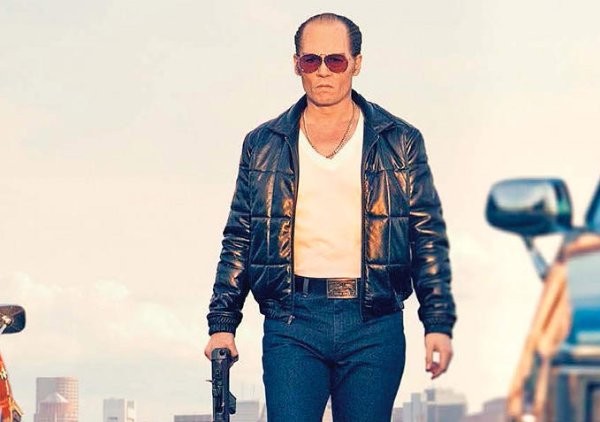 James â€œWhiteyâ€ Bulger is a name much like any other famous gangster that generates the shakes. From Frank Lucas, to John Gotti, and all the way back to Al Capone, holding his own, Bulger is a man unlike any other thug with so much menacing history, itâ€™s too much to easily comprehend. Making a name for himself by running the mean streets of South Boston, playing his own ghetto games while taking the feds on a joint-like expedition isnâ€™t something many can say theyâ€™ve accomplished. As the number two guy (behind Bin-Laden) on the FBIâ€™s most wanted list, heâ€™s one of the nationâ€™s old-school gangsters who flew under-the-radar till his recent arrest in 2011. After a few documentaries, it was inevitable Hollywood would take a shot at a bio-pic.

In the 1970s South Boston, FBI Agent John Connolly (Joel Edgerton) persuades Irish mobster James “Whitey” Bulger (Johnny Depp) to collaborate with the FBI and eliminate a common enemy: the Italian mob. The drama tells the story of this unholy alliance, which spiraled out of control, allowing Whitey to evade law enforcement, consolidate power, and become one of the most ruthless and powerful gangsters in Americaâ€™s history.

For starters, itâ€™s great to see Depp back doing real acting work. Nothing in the last few years of his career has been this intense since 97â€™s DONNIE BRASCO. Itâ€™s a relief to see him off all sorts of goofy make-up and idiotic accents. Engaging, considering Whiteyâ€™s one-note demeanor, thereâ€™s lots of depth in Depp! Aggressive, yet charming in some ways, gangster personas is something this man has the ability to own. Coming off like a hybrid between Nicholson and De Niro, Deppâ€™s less-is-more approach as Whitey reaches lots of his objectives, both literally and figuratively.

It doesnâ€™t end there. Much of his elevated performance is in part due to his great, dark chemistry with Joel Edgerton. Running parallel to Depp, Edgerton deserves some much needed kudos. His characterâ€™s sketchy arc displays so much of their connection considering their paths in life. As the film progresses, thereâ€™s a sweet blend between old friends as criminal and federal agent lose themselves when balancing off each otherâ€™s purposes. In many ways, BLACK MASS could have been laced to follow either story.

Alongside a tremendous cast of supporters which include Benedict Cumberbatch, Sienna Miller and Kevin Bacon (to name a few), at a two-hour run, BLACK MASS provides lots to digest. Whether drawn-out scenes that may feel uneven at times, all through harsh, in-your-face murders thatâ€™ll make you cringe, this film holds its own with lots of artistic, gritty weight and intensity.

Although cynically captivating, nothing can come close to Bulgerâ€™s existence and impact while watching any of his documentaries. Much in the film can be questioned seeing as Hollywood glam steals some of the purposeful, menacing moments that made Bulger who is he is. So, much like 12â€™s THE ICEMAN to Richard Kuklinski (played by Michael Shannon), take this flick for what it is, but do follow up with authentic reports.

Overall, BLACK MASS will generate a feeling no matter what, just know how long itâ€™ll take to shake it off solely depends on you.