"BLEED FOR THIS | Movie Review"

Boxing-based movies seem to be the most impactful of any kind of sports-based films. They’re real even if they’re fake. They hurt even though you know they’re choreographed. Fact or fiction, narratives seem to make your heart beat like a speedbag. RAGING BULL, ROCKY, THE FIGHTER, HANDS OF STONE are in an elite club of films that will now be joined by BLEED FOR THIS.

That said, to this day, Vinny “The Pazmanian Devil” Pazienza remains one of the best and emotionally strongest fighters of all time. The sport of boxing has had its long list of greats. From Muhammed Ali to Mike Tyson, to Oscar de la Hoya and Julio Caesar Chavez, Sr., like Pazienza, the list of unique, talented, hungry fighters goes on and on. Driven by ruthless aggression, this severely unique individual represents the art of struggle when all odds were stacked against him.

BLEED FOR THIS is the incredible true story of one of the most inspiring and unlikely comebacks in sports history. Miles Teller (WAR DOGS, WHIPLASH) stars as Vinny Pazienza, a local Providence boxer who shot to stardom after winning two world title fights. After a near-fatal car accident leaves Vinny with a severed spine, he is told he may never walk again. Against all odds and doctor’s orders, renowned trainer Kevin Rooney (Aaron Eckhart) agrees to help Vinny return to the ring just a year after the accident for what could be the last fight of his life.

Comeback story first and boxing second, BLEED is a remarkable film. It’s got a lot of heart and drive, making it an engaging piece. The irony of it being a true story I’m sure (unless a hardcore fan of the sport), not many know about elevates the narrative’s respect. What better way to get it off the ground and tell it with such a fantastic cast, mainly Miles Teller (who loses himself as a fierce Vinny Pazienza) and Aaron Eckhart (unrecognizable as trainer Kevin Rooney). There are slow-burns, but the buildup is phenomenally worth it. Full of grit, this small budget film packs a big budget punch. 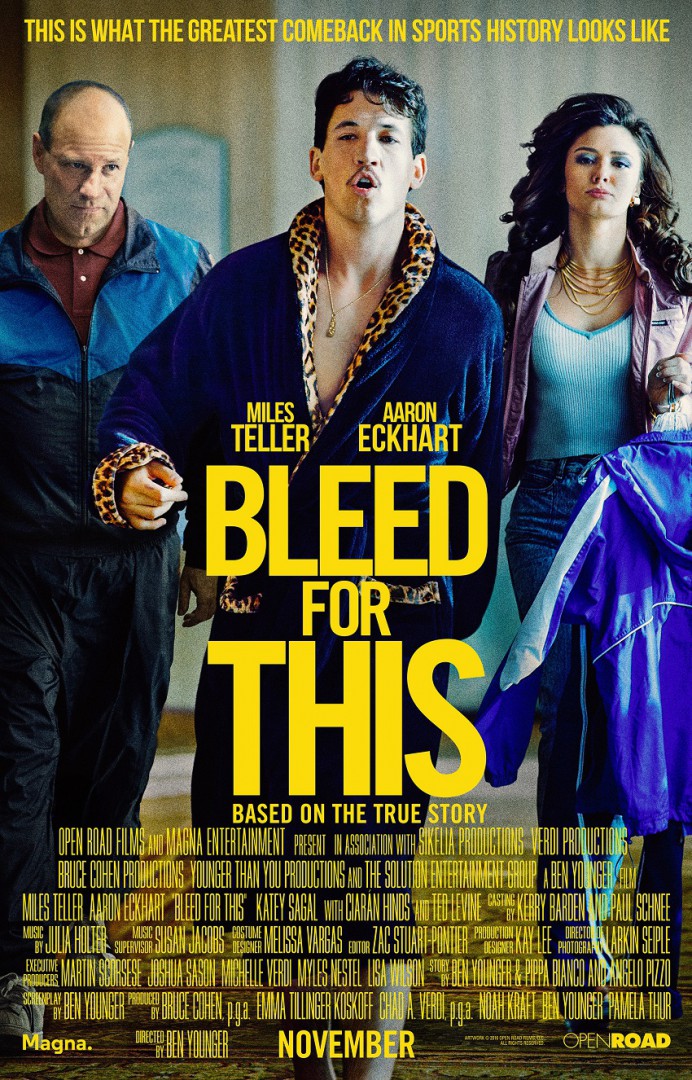