Truth be told, I’m not gonna sit here and type a bunch of mish-mash about how much I loved the original MARY POPPINS (’64), or how much it meant to me as a kid. I was entertained but wasn’t moved by it. While never a favorite, it was a movie I always recall catching from time-to-time. Whether it be with cousins, or during recreational time in elementary school, it was always a background piece with appealing music – how can we forget “Supercalifragilisticexpialidocious?” – animation, and fun characters. It was there, and it grabbed my attention. Then, years later as an adult, living in NYC – mecca of all things theater – I was interested in catching the Broadway show – and I did. Twice! Combining what I had endured as a kid, then years later as an adult, I had worked up an appreciation and respect for Mary Pops! Here we are a little over fifty years later with a sequel and I must be honest… Not only did I want to, but also needed to see it.

In Depression-era London, a now-grown Jane (Emily Mortimer) and Michael Banks (Ben Whishaw), along with Michael’s three children, are visited by the enigmatic Mary Poppins (Emily Blunt) following a personal loss. Through her unique magical skills, and with the aid of her friend Jack (Lin-Manuel Miranda), she helps the family rediscover the joy and wonder missing in their lives.

If there were ever a visual need to define something being the same yet different, MARY POPPINS RETURNS would be it, and who cares? This movie is pure, upgraded delight from beginning to end. And what makes it so charming are the following: 1. Emily Blunt 2. Lin-Manuel Miranda and 3. Its musical performances.

Witty, touchy and adventurous would be the best way to describe MPR. It follows through with its predecessor’s style and look. It’s more than just a sequel. It’s pure escapism in form of a love note to the original. And the bulk of that is due to Emily Blunt. So much, Blunt force would be an understatement! Not that she did or tried, but filling Julie Andrews’ shoes is/was no easy task. But truth is Blunt embodies Poppins. She owned it. She’s a charm to watch, and as a fan of hers this is a breath of fresh air for both her and her career. Her presence in the role warms the narrative and iconic character.

The great thing about all this is how the script allows the story to pull back on Blunt’s spotlight and allow others to shine. The movie actually starts with its lead supporter, Lin-Manuel Miranda whose character is “in charge” of setting the pace. Just as charming to watch as “Jack,” Miranda is also a fierce delight to watch. Mr. HAMILTON is the backbone to this movie. Well-balanced story structure gives this man the chance to show off his chops as well. With many musical solos throughout the movie jumping from one magical set-design to the next, the power of his performance makes him an unforgettable character. During moments in the film that entails both Blunt and Miranda working as a team – especially during an animated segment – its simply so much more magical than the beauty – for its time – we see in the original, which also has its touches in MPR with fun cameos from original cast members Dick Van Dyke and Angela Lansbury. Meryl Streep has her moment as well. Fun to watch, but it wasn’t as impactful as everything that we see before and after it.

A lot of the successes to this movie must also be accredited to director Rob Marshall. I’ve always been of the mentality that musicals must be difficult to direct. Directing a movie isn’t easy, but directing a musical movie…? That’s a whole other monster. Throughout the film there are these steroid-induced, super choreographed musical moments that entailed a lot of detail, blended with some danger seeing as one involved fire. It’s trippy to think the amount of time and dedication and perfectionism that needs to be applied to a cause with a result that seems “easy.” For that alone, my hats off to Marshall for having pulled through and present a piece that garners just as much respect as its original.

While the only “gripe” I may have is how it’s a wee bit too long, or how there really isn’t a song that’s going to resonate for decades to come, the film is full of love, joy and a heartbeat to all things optimism. MARY POPPINS RETURNS took its time to land. But it was done smoothly and beautifully. The film hasn’t even opened yet and it’s already causing a stir of award nomination echoes. As a whole, it’s princely the perfect holiday family flick. Its release is happening at the right moment. Therefore, tag along and enjoy! 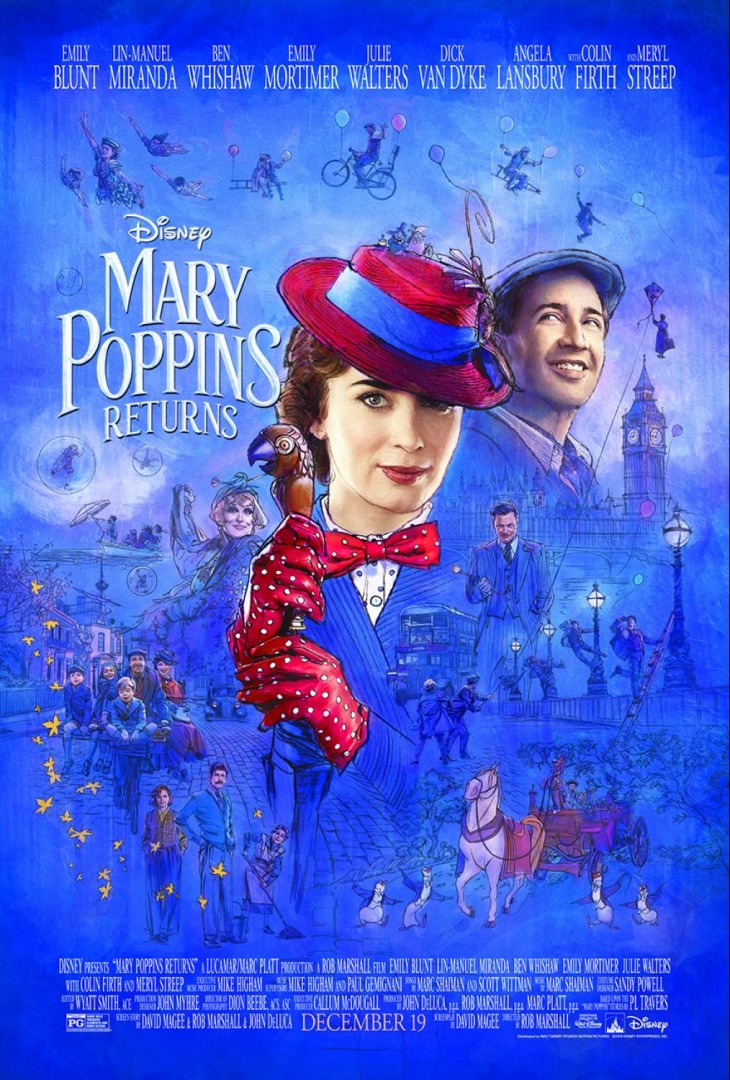