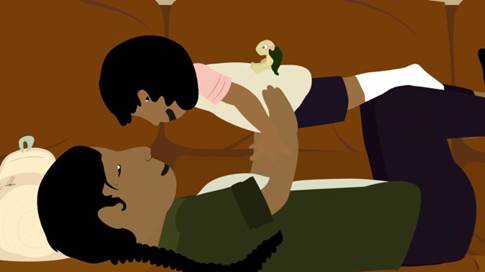 The new digital short Caracol Cruzando is a timely animated film touching on the harsh realities of immigration for undocumented families which debuted today on PBS.org as part of PBS’ 2018 Online Film Festival. Animated and written by Pamela Maria Chavez, the film will be presented by Latino Public Broadcasting (LPB).

PRESS HERE to vote for the film.

Caracol Cruzando is a story about Anais, an eight year old Costa Rican girl, who is forced to face the hardest decision she’s ever had to make: going against her parent’s wishes and sneaking her best friend and pet turtle, Tiku, with her across the United States/Miami border, or leave him behind. While Anais is dealing with this difficult decision, she is also confronted with the possible separation and loss of her family. In order to elude suspicion, Anais’ parents have decided to cross the border separately: Anais and her Father, Hector, will cross as one, and her Mother, Yelida, and brother, Carlos, will cross separately, placing pressure on Anais’ decision regarding Tiku.

The animated film is set in Costa Rica, where Anais’ relationship with nature helps her build the necessary courage to make this heart wrenching decision, regardless of the outcome. Set in the pseudo-fictional coastal town of Caracol Mountain, the story touches on elements of land rights and development, immigration, young Latinx coming-of-age, hope, love and the reinvigorating power of hope.

“I’m incredibly honored to share the story of Caracol Cruzando, my first major animated film, at this year’s online film festival with PBS,” says Director Pamela Maria Chavez. “This film offers a unique and moving perspective of the immigration experience- one that could not be presented at a better time given recent events targeting the separation of children and parents at the border.”

Beginning July 16th, the PBS Online Film Festival will be available via PBS and station digital platforms, including PBS.org, YouTube and PBS social media channels. The films will also be available via the PBS app on iOS, Android, Apple TV, Roku and FireTV devices. Viewers are encouraged to watch, vote and share their favorite film by going to pbs.org/filmfestival. The film with the most votes will receive the “Most Popular” award. Additionally, a distinguished panel of eight jury members will select their favorite film of the festival for the “Juried Prize.” For updates on the festival, follow #PBSFilmFest on Twitter. 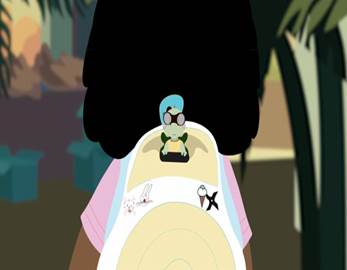 Pamela Maria Chavez is a Costa Rican illustrator and animator influenced by contemporary issues impacting communities of color. She primarily focuses on issues affecting young people who struggle to find hope in tumultuous circumstances. In her work, Pamela hopes to highlight the resilience and beauty that rise from these uniquely important experiences. She’s influenced by the Chicanx/Latinx feminist legacy of live-action filmmaking, hoping to take what she’s learned and apply it to the world of animation. After a brief stint as a youth advocate and organizer, she now relies on the redefining powers of visual media to create a change in this world. This is Pamela’s first major animated short.

About Latino Public Broadcasting
Latino Public Broadcasting (LPB) is the leader in the development, production, acquisition and distribution of non-commercial educational and cultural media that is representative of Latino people, or addresses issues of particular interest to Latino Americans. These programs are produced for dissemination to public broadcasting stations and other public telecommunication entities. Latino Public Broadcasting provides a voice to the diverse Latino community throughout the United States and is funded by the Corporation for Public Broadcasting. Latino Public Broadcasting produces the series VOCES, PBS’s signature Latino arts and culture documentary showcase and the only ongoing national television series devoted to exploring and celebrating the rich diversity of the Latino cultural experience. Between 2009 and 2016, LPB programs won over 85 awards, including the prestigious George Foster Peabody Award as well as two Emmys, two Imagen Awards and the Sundance Film Festival Award for Best Director, Documentary. In addition, LPB has been the recipient of the Norman Lear Legacy Award and the NCLR Alma Award for Special Achievement – Year in Documentaries.

About the PBS Online Film Festival

PBS, with nearly 350 member stations, offers all Americans the opportunity to explore new ideas and new worlds through television and digital content. Each month, PBS reaches over 90 million people through television and 30 million people online, inviting them to experience the worlds of science, history, nature and public affairs; to hear diverse viewpoints; and to take front row seats to world-class drama and performances. PBS’ broad array of programs has been consistently honored by the industry’s most coveted award competitions. Teachers of children from pre-K through 12th grade turn to PBS for digital content and services that help bring classroom lessons to life. Decades of research confirms that PBS’ premier children’s media service, PBS KIDS, helps children build critical literacy, math and social-emotional skills, enabling them to find success in school and life. Delivered through member stations, PBS KIDS offers high-quality educational content on TV – including a 24/7 channel, online atpbskids.org, via an array of mobile apps and in communities across America. More information about PBS is available at www.pbs.org, one of the leading dot-org websites on the internet, or by following PBS on Twitter, Facebook or through our apps for mobile and connected devices. Specific program information and updates for press are available at pbs.org/pressroom or by following PBS Pressroom on Twitter.