JUSTICE vs. JUST US

Limitless power can probably be one of mankindâ€™s most desired fantasies. With it, the skyâ€™s the limit in terms of any success and/or desired actions â€“ including one that entails taking on forces stronger than you. Glorified among cultures across the world, time and time again the drug wars between the U.S. and Mexico have been the scope of contemporary atrocities at the hands of both governments and those who oversee the sketchy operation. With its utmost influences on any angle seen among either society, thereâ€™s a subculture that thrives off it. Whether involved in it, or not, as societies on both ends of the spectrum, defeated would be the best way to define those whose morbid obsession and/or interests towards the drug game and its visceral package would be the only form of modern day success.

But when some tangled in this web of chaotic complexity have had enough, gloves are off! With amazingly rough, rugged, and raw access, CARTEL LAND is a powerful documentary that follows the journeys of two modern-day vigilante groups and their shared enemy â€“ the notorious Mexican drug cartels.

Terrifying in any way one can image, filmmaker Matthew Heineman places himself (and life if weâ€™re going to be real about it) in the heart-beat of darkened existences as Nailer, El Doctor, and the cartelâ€™s menacing henchmen each compete to enforce their own style of justice to a society where government has dropped the ball. Executive produced by Kathryn Bigelow (THE HURT LOCKER, ZERO DARK THIRTY), CARTEL LAND is a hard-core, informative, educational, and visceral intervention on the breakdown of â€œlaw-and-order,â€ as well as blurred lines of good, evil, and a little in between.

Filled with lots of horrid layouts, tense scenery, and graphic stories, the reality is in this day-and-age there needs to be more done among not just our governments, but our own people as a whole in terms of trying to live life for the greater good. Touching sensitive issues, itâ€™s without question this film will be praised, as well as criticized. Without sugarcoating anything, Heineman surely did a phenomenal job at gaining not only access, but the trust of all parties involved in this piece in order to help present a very complex issue. Where one cries out of heartbreak due to the loss of a loved one, another knows itâ€™s wrong, but smiles because itâ€™s a security blanket for familial well-being and street-cred! Doing what it needs to do, CARTEL LAND is another emotional roller-coaster of a documentary that makes one wonder about life and how exactly did we get where we are today.

As a game of profitable horrors, the reality is as long as things remain as they are in both countries, itâ€™ll only get worse. Igniting lots of questions on where to pin blame, brutal awareness and/or fears prove somewhere out there thereâ€™s always a soul, or two, or three willing to take drastic measures into their own hands.

As a solid, death-defying piece, CARTEL LAND is definitely one of the yearâ€™s best and must-see films! 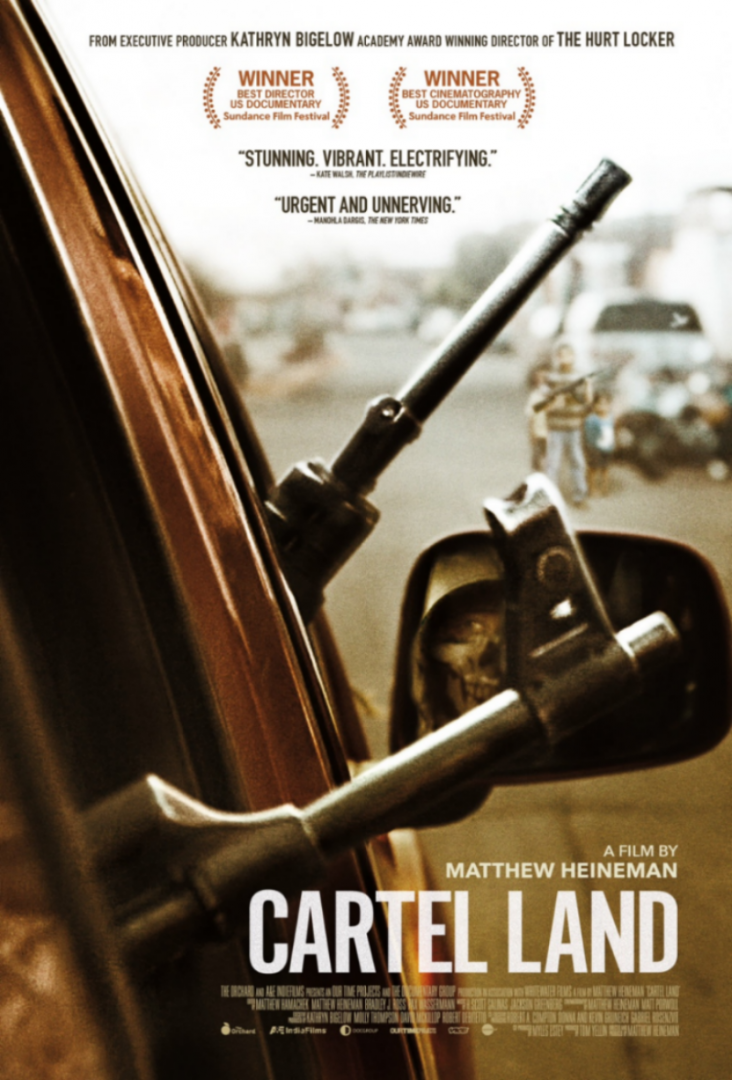