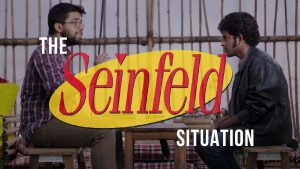 ***This video is a not-for-profit tribute to the show Seinfeld by NBC in response to the recent cancellation of Jerry Seinfeld’s Stand-up gig in Mumbai. The logo and theme have been used under fair use of copyright.

“Hey Hey Hey… I cant tell the future like your uncle.” While the video is funny I can see where this will be looked at in a different light. I at first thought that this was going to be a real Seinfeld moment but it was funny. This seems to have been in reference to Seinfeld’s recent cancellation’s in Mumbai.

Do you think this is a fair apology?