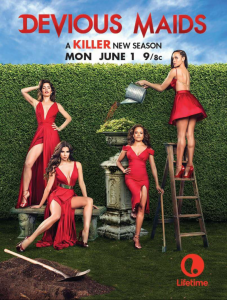 Devious Maids is a juicy primetime dramedy about a group of maids in California who work for the rich and powerful.Â  The series began in the spring of 2013 and revolved around the murder of a maid named Flora.Â  All season long secrets were revealed as the mystery surrounding her death unraveled and by the end we learned who really committed the murder.Â  Season two revolved around a gang of thieves of went around robbing the people of the town and things were going good until one robbery resulted in a murder.Â  The season ended in a cliff hanger as the last of the gang members opened fire at a wedding intending to kill the one person who could link him to the crime.

Last Monday saw the return of the LUSCIOUS LATINAS and we FINALLY learned who was shot and it turns out there were 3 victims including the priest that resided over the wedding and the blushing bride.Â  Rosie Falta (Dania Ramirez) now Rosie Westmore was shot and upon collapsing hit her head hard on the ground, the knock resulting in Rosie falling, into a coma which lasted 4 months.Â  While she was hospitalized her new husband Spence Westmore (Grant Show) who was let go from the soap opera he worked on, made a softcore porn movie to pay for the hospital bills and look after Rosie’s son Miguel.Â  This angered Rosie because Spence didn’t tell her (she learned of the movie from her nurse who showed her the film) but she forgave Spence because he was simply doing his best.

Zoila Diaz (Judy Reyes) suffered the most from the shooting as we learn from the opening sequence that the third victim was her ex husband Pablo (Alex Fernandez) who was the lone fatality.Â  Zoila, who last season learned she was pregnant but unsure who the father was (she had a one night stand with Pablo) had a secret paternity test done and learns that Pablo is the biological father and not her boyfriend Javier (Ivan Hernandez).Â  Zoila decides to come clean but when she breaks the news to Javi, he’s overcome with joy at the thought of being a father.Â  Feeling too guilty to break his heart, Zoila decides to allow him to believe that he’s the father.Â  Who would ever know?Â  Pablo is dead and only her boss and friend Genevieve Delatour (Susan Lucci) knows her secret.Â  Tread carefully Zoila because if we’ve learned anything from secrets it’s that they always have a tendency of revealing themselves.

Marisol Suarez (Ana Ortiz) has been enjoying the life of luxury and as her book lands on the New York Times best sellers list and becomes a literary success.Â  The book is based on her exploits going undercover as a maid to prove her son’s innocence (the main story arc of the first season).Â  Success has brought new friends into her life and with that she’s been rubbing elbows with the rich and wealthy, but it’s not until a party for her book where she overhears her wealthy gal pals talking down about the maids that she realizes these women are not the kind she wants to call her friends.

Carmen Luna (Rosalyn Sanchez) continues her love affair with the married Sebastian (Gilles Marini) who has been keeping her in a rental home, but it turns out not only does he not have any money to himself name (his wife is the one with money), but the rental he has Carmen in is actually one of his listings.Â  She discovers this when she comes downstairs and walks in on him showing the place to potential buyers.Â  DAMN bro a listing?Â  Smh dudes will do ANYTHING to keep a hot piece of ass in their lives I see.Â  Carmen is an alluring beauty but come on a listing?

New to this season is fellow maid Blanca (Glee’s Naya Rivera) who lands a job working for the Stappords who’ve moved back to town.Â  It’s nice to see some familiar faces but with their returns comes some mysteries we’ll be wondering about all season long.Â  Firstly where did they get their adoptive daughter from and why does she hate her new father so much?Â  Secondly Blanca moves in earlier then expected and happens upon Mrs. Stappord who was attempting to clean up what looks like a murder scene in her living room.Â  “What the hell happened in here?” is what Blanca asks Taylor (Brunn a Brown) and something viewers were left wondering as well.Â  A third mystery (which may or not be connected to the scene in the Stappord’s home) invokes a severed leg that Evelyn Powell (Rebecca Wisocky) discovered in her garden.Â  Tune in to Lifetime tonight at 9pm for an all new episode of Devious Maids, check your local listings for channel information.