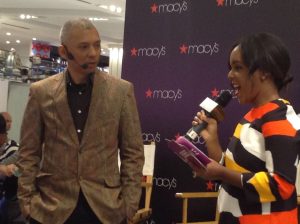 Before the major holiday shopping begins, Macyâ€™s kicked off the holiday season with Essence magazine. This was a one-of-a-kind event featuring Essence Beauty Editor Nykia Spradley, Grammy nominated R & B singer Elle Varner, and Celebrity Make-up artist Nick Barose as they gave make-up tips and tricks on perfecting the holiday look. Nykia had an impromptu discussion with these two Hollywood insiders as they revealed their beauty secrets. As shoppers watched and listened, they indulged on refreshments and drinks.

Elle spoke about her makeup inspiration, favorite color lipstick, and to avoid wearing red and green in the winter. Not to mention, she pulled a plug by talking about her new singles from forthcoming album Four Letter Word.

Nick Barose is a celebrity make-up artist to many stars including Oscar winner Lupita Nyongâ€™o, Scarlett Johansson and Kim Cattrall just to name a few. He spoke about the importance of finding your true match for your skin tone. Liquid foundation is his favorite to use in the winter. He demonstrated a variety of beauty products on three models that were all different ethnicities and shades. Nick applied foundation and a touch of lipstick to each model while explaining the best products for their skin. After the event, Elle briefly took photos with fans while exiting.

On other note, several issues occurred at the event. It started over a half hour late and technical issues caused the event to delay a little longer. Advertisements failed to mention that goodie bags would be included with a purchase. The announcement was not made until the start of the event, which stirred frenzy.

Shoppers were so eager to make a purchase from participating vendors (Fashion Fair, Bare Minerals, Clinique, Bobbi Brown etc.) just to receive a goodie bag. With any purchase at these vendors, you received a ticket to redeem your gift. This bag included the December issue of Essence featuring Annieâ€™s Quvenzhane Wallis and Jamie Foxx gracing the cover and mixed beauty products. Overall, the event was a great start for the holiday season. It was free and open to the public. If you missed out, there will be plenty more. Macyâ€™s has a full schedule ahead for this holiday season. For more info, visit www.macys.com/events.