"Figuratively & literally, what does it take to be a LATIN LOVER? | Review/Interview (Eugenio Derbez)"

Following his global success of 2013’s “Instructions Not Included” was not an easy task for Mexican and Latin American comedy superstar Eugenio Derbez, who wrote, directed and starred in what remains the highest grossing Spanish film in American movie history. The fortunate timing of “Instructions” also provided further exposition on the importance of diversity in Hollywood. Derbez followed that by flexing other creative muscles while patiently searching for the right project as a filmmaker, securing roles in such features as most recently “Miracles From Heaven” and the upcoming action drama “Geostorm.” Being able to now choose projects that best fit his comedy brand was a serious task. Derbez, who now holds more power than most know, has taken it upon himself to produce his own work via 3Pas Productions, a company he’s partnered up with along Benjamin Odell, and whose piqued interest as their first English (with a Spanish version as well) feature centers around an aging gigolo.

Hence, “How To Be A Latin Lover.” Growing up in a loving family in Mexico, Maximo (Eugenio Derbez) was raised to become like any other young boy in this world, but with one, small difference. He dreamed he would never, ever work hard for anything in his life. And for 25 years, he succeeded perfecting skills of seduction and romance to secure his goal: to marry a rich, older woman, one who would pay his way to secure the finest things he felt he deserved. Yet, Maximo never thought the day would come when that dream would become a nightmare. A nightmare that would switch his life from riches-to-rags.

What can be said that hasn’t already been said about a film that stars Eugenio Derbez? Seriously? Upping the ante, now he’s (3Pas) running his is own show. “How To Be A Latin Lover: is quite a charm that goes above and beyond. It’s fun, witty, chaotic, heartwarming, and most of all… funny! Really funny! Aside from Derbez unleashing his comedic genius, what elevates the enjoyment of this film is its supporting cast who individually spice up the narrative with their own swag. As a directorial debut by acclaimed actor and writer Ken Marino, the piece is pleasantly a lot more entertaining than most would think. Derbez will secure his fan-base. That’s not even a question in their mind. But once that curious, cross-over bug bites, “Latin Lover” will garner Derbez a new following. As a whole, “Latin Lover” is well-rounded with a lot of heart and pleasing to all audiences. The film oozes more than machismo. It’s seductive satire!

Also starring Salma Hayek, Rob Lowe, Kristen Bell, Raquel Welch, Rob Corddry, Rob Riggle, and Raphael Alejandro as Hugo, “How To Be A Latin Lover” will open nationwide in both English and Spanish on Friday, April 28th! The magic that is a movie starring Eugenio Derbez isn’t complete without getting a little feedback from the man himself. Having been granted a chance to interview him, he opens on everything from the start of the film’s idea, to execution, and some ideas of what it takes to be something I’m not… a Latin lover. It’s always my pleasure to appease my readership, so, this one’s in Spanglish! 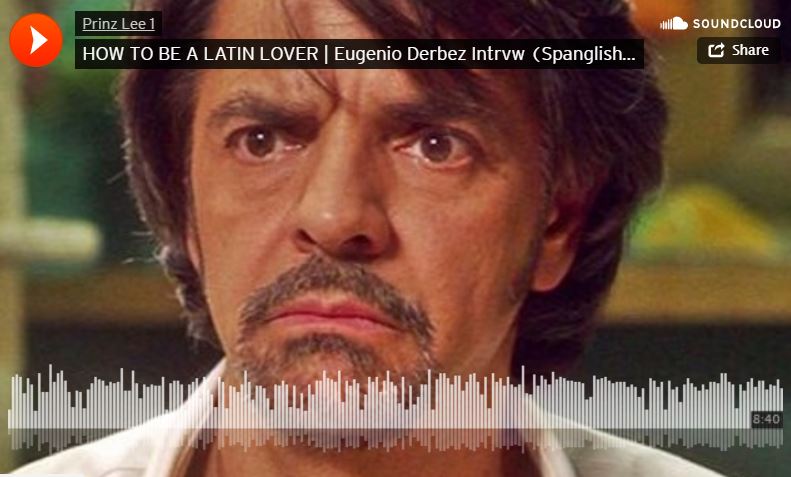