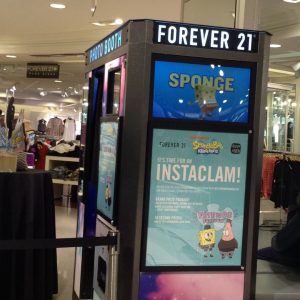 Nickelodeon meets fashion in Times Square. Throughout the streets of Times Square, cartoon and comic book characters are always roaming the streets for photo ops. However, this time around you found one bubbly character in a female dominated store. He goes by the name of SpongeBob SquarePants along with his sidekick Patrick lighting up the room in Forever 21.

Coincidentally, this larger than life sponge that normally lives under the sea came to have some fun in the cold. Today was not only the release of his new Nickelodeon film The SpongeBob movie: Sponge Out of Water, but his collection with designer Mina Kwon. Tourists and New Yorkers gathered around to check out the limited edition line and have fun.

Wristbands were given out at the start of the event due to capacity. Once it kicked off, you had to quickly go to the closest stations of photo booth, nails, drinks, and photo op with SpongeBob and Patrick. No Mina Kwon in sight, but that didn’t stop the party from going. While trying out different activities, some shopped and received a special SpongeBob tattoo with purchase. You would think for a jam packed space, people would leave. No! The crowd grew bigger during this family friendly event.