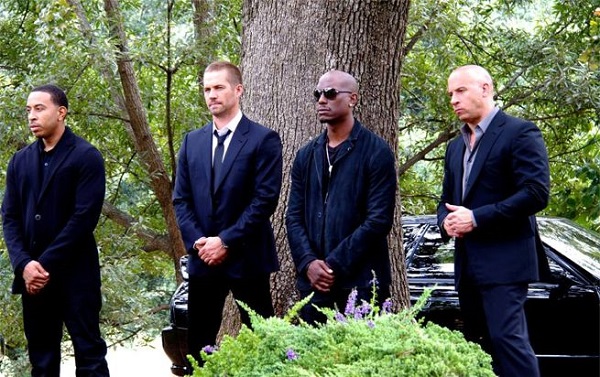 7X the noise, ruggedness, and chaos!

Damn! Howâ€™s that for a cast rundown?

Well, itâ€™s here. To say this wasnâ€™t one of the yearâ€™s most anticipated movies means you were probably dropped on your head more than once as a kid, or youâ€™ve been living in a cave the last few years. Elephant in the room, Paul Walker (obviously), aside from the fact that this is a Lin-less piece taken over by a â€œCreepy Puppet,â€ and if we really want to get to get to the nuts-and-bolts of itâ€¦ come onâ€¦ you mean to tell me that post-credit scene in FF6 with Jason Statham didnâ€™t turn you on?

Sure, one must disengage their brain when embarking upon a wild world of fast cars and over-the-top scenarios, but that’s why we love it. Going from zero to hundred, we thrive and live vicariously through all the nuttiness and hardcore, stone-faced characters. 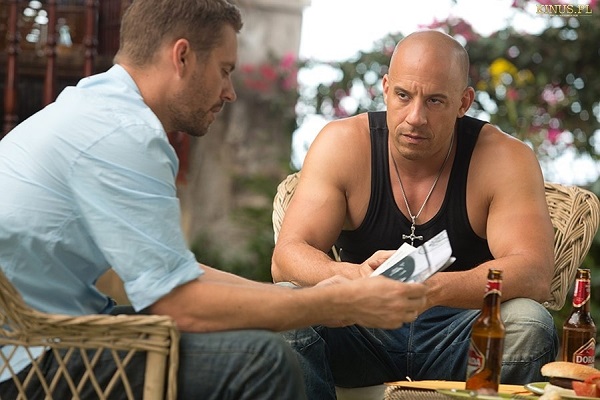 Bigger on just about every chaotic scale of silliness, FURIOUS 7 redefines action in every way, shape, or form, sealing it as one of the last, raw, action series left in Tinsel Town. But this provides more than noise and muscle-cars… In a twist upon emotional events, it also provides a touching send-off for Paul Walker â€“ a soul who has left an un-erasable skid mark upon the franchise.

Jason Statham starts off the flick as he retouches his brotherâ€™s horrid events, making it clear hellâ€™s gates are about to open. Displayed with interesting camera shots and effects that solidify upcoming actions that pertain to him, we then start to catch up with Dom and his crew.

Getting right to it, fright master James Wan (SAW, THE CONJURING) starts to unleash within a genre foreign to what weâ€™re use to, but cleverly expressed in a pulsating way. Interesting action-sequences and occasional, fancy camera work sets you up with a POV that feels great, and gives off jittery feelings of mind-boggling imagination.

LA, Tokyo, Azerbaijan, the U.A.E., and back to LA, Dom and his crew do what they do best as the plot unfurls: seek, confront, and destroy! From common car chases, to rowdy, muscle-car chute drops, fisticuffs (Rodriguez vs. Rousey was a complete turn-on for me), and a total free-for-all that basically destroys some of LA, FURIOUS 7 is geared to give you more than you can handle, and then some.

The movie itself is brutally silly, but fun. I’ve always had a theory about this franchise and that’s every single movie has to outdo the next with incomprehensible craziness. So much, it’s come to a point where even the characters and dialog is so over-the-top, you can tell the writing is done on purpose to sound, feel, and look a certain way. It’s like they’re the human version of The Avengers with muscle-cars.

Providing everything fans of this franchise expect and/or want, FURIOUS 7 stands on its own and teases at inevitable re-invention. Stylistically different, Wan made sure his work-ethic and new style garners respect, giving the FURIOUS fan-base hopes of perhaps directing another (if ever) in the future.

A bit of continuity missteps aside, it’s quite pleasing and entertaining. With a clever unambiguous ending, will this be the end of the franchise? Doubt it. Universal knows it has a solid following and its fans will keep coming back no matter what. Personally, I do hope at some point they lay this to rest for a bit. Iâ€™m a big fan of going out on top, rather than overstaying your welcome. But who am I?

What’s to come with this franchise remains to be seen. Until then, rest in peace, Mr. Walker!