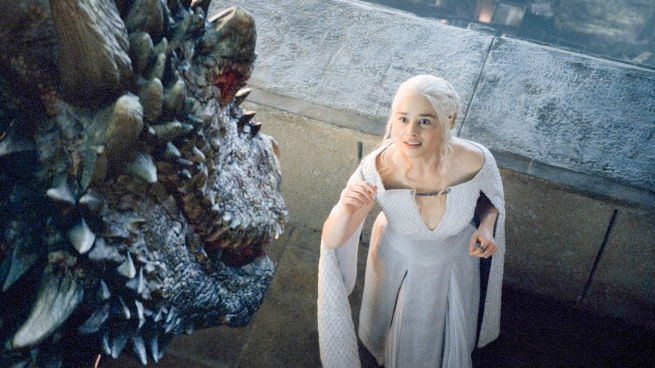 All HAIL the new Queen!Â  That’s right as Lady Margory Tyrell (Natalie Dormer) finally gets her wish and becomes a Queen.Â  She marries King Tommen Baratheon (Dean-Charles Chapman), the sitting King and youngest child of Queen Cersei Lannister (Lena Headey).Â  Now that Margory sits upon the throne as Queen she has plans she intends to make happen.Â  For starters?Â  Using her charms (both in and out the bedroom) to influence Tommen into loosening the reigns that mother Cersei has on him.Â  Uh uh Queen Cersei, looks like your power and hold are fading and before long you may end up as just the King’s mum.Â  But don’t count Cersei out, that diabolical bitch still has a few tricks underneath her skirt (you’ll see what I mean closer towards the end of tonight’s episode).

The Stark girls of the Stark girls!Â  Lord Petyr Baelish (Aiden Gillen) has devised a plan to marry off his niece in law Lady Sansa Stark (Sophie Turner) to Lord Ramsay Bolton (Iwan Rheon) the pyscho son of Lord Roose Bolton (Michael McElhatton).Â  Roose, as fans of the show know, is the man who Sansa’s her older brother Rob back in season 3.Â  Petyr convinces her that this marriage would be the best thing for her, but it’s clear that he and Roose are up to something that could potentially be big.Â  The question is WHAT the hell are they up to?Â  Whatever it is it can’t be good.Â  Meanwhile Arya Stark (Maisie Williams) now living inside the house of black and white is having a difficult time due to the fact that Jaqen H’ghar (Tom Wlaschiha) has her doing chores as opposed to being his apprentice like she thought.Â  Fear not young Arya, everything you are doing is to prepare you to become the force you dream of becoming.Â  Arya has great potential and I’m curious to see how magnificent she’ll become, but more importantly if she will have her day and avenge her family.Â  I’m rooting for u Arya!

Brienne of Tarth (Gwendoline Christie) and her squire Podrick Payne (Daniel Portman) have a breakthrough.Â  What starts off as simple conversation turns into Brienne learning that Podrick respects her.Â  She’s the best fighter he’s ever seen and is in awe of her and her courage.Â  This takes Brienne by surprise and causes her to change her tune.Â  She decides to take him under her wing and teach him all that she knows about combat.Â  I’m rather fond of Brienne because she’s the only real female warrior on the show.Â  Plus I’ve ALWAYS been a fan of any woman who can kick ass and hold her own.Â  Podrick will be good for Brienne and he for her and together they will be a formidable team.

Were you CHEERING last week when Jon Snow (Kit Harington) was appointed Lord Commander of the Night’s Watch like I was?Â  FINALLY he’s getting some overdue respect, but JUST as Jon is settling into his new role he’s met with some resistance from within the Night’s Watch.Â  Just how will the new Lord Commander handle the disrespect?Â  Let’s just say Jon has come a LONG way and sometimes the BEST way to make sure your people know who’s boss is to make an example they will NEVER forget.Â  And TRUST me you will NOT forget his example.Â  Tune in tonight at 9pm for episode 3 of the new season of Game of Thrones on HBO.