"Game of Thrones: Season 5 Episode #2 – The House of Black and White" 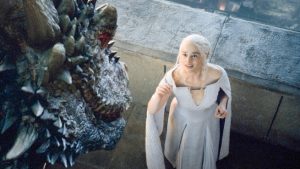 A new champion will rise, Cersei will learn that she’s made powerful enemies, one of the Stark children will get closer to the answers they seek and Daenerys will witness first hand the ugly side of angering her subjects.Â  Let’s dig in!

Cersei Lanister (Lena Headey) is caught between a rock and a hard place.Â  On one hand she’s fearful for the life of her only daughter Myrcella (who’s in Dorn since she was promised to the prince) after a necklace (a replica of the one worn by Cersei and her late son Joffery) is sent to her hanging off the fangs of a snake statue.Â  The object and display of the necklace is no doubt a threat, but is it against the Queen herself or on her daughter’s life?Â  On the other hand she continues to assemble the council for her son King Tommen, but not all are fooled by the Queen who in truth is making this council to use at her very own disposal (on behalf of the King ofcoarse!).Â  What’s a Queen to do?Â  Well if you’re Cersei who plot and scheme and find a way to crush your enemies.Â  I don’t care for the bitch (she’s cruel, vicious and conniving for no valid reasons at all) and deserves EVERYTHING she has coming her way.Â  I wonder just how long can Cersei keep going before she’s finally made to pay…

Arya Stark (Maisie Williams) has FINALLY made her way across the narrow sea in search of her friend JaqenÂ H’ghar, the assassin with a heart.Â  As she arrives where he informed her of where he could be found, Arya is not welcomed with open arms.Â  Hell she isn’t welcomed at all and told to be on her way.Â  WHERE the hell is she supposed to go?Â  Father, mother and oldest brother are all dead, her home was invaded and the remaining Stark children are scattered across various regions unaware of each others whereabouts.Â  Now was Jaqen pulling the young lady’s chain or was Arya simply not going about things the right way?

Speaking of the Stark children, their half brother Jon Snow (Kit Harington) has made quite the evolution from the begining of the series to now.Â  He went from simply being the bastard child of Eddard Stark to a guard of the Night’s Watch, then went awol only to end up a prisoner of the wildlings to becoming a wildling himself, then escaping the wildlings and becoming a formidable warrior thus being reinstated back onto the Night’s Watch.Â  His actions have not gone unnoticed and after four seasons of getting little respect it seems Jon Snow may finally get his day in the sun.Â  The reward will make his fans smile and cheer (you’ll know the moment when it happens).Â  I wish Eddard Stark was still alive because this is a moment he would’ve been most proud of and Jon would’ve been so happy to have shared it with his father.

When Daenerys Targaryen (Emilia Clarke) gives an order you BEST believe that the order WILL be carried out.Â  The Sons of the Harpie assassin that killed one of the men of Daenerys’ unsullied army is found and brought to the palace.Â  After hearing out her council,Â  Daenerys agrees to give the man a fair trial, but some are not so willing to side with the young Queen.Â  An act by one of her subjects forces her hand to do something no one will see coming let alone believe until they see it and it will cause Daenerys to draw anger from the people.Â  Is the Queen embracing the same darkness that her dangerously beloved dragon Drogon is channeling?Â  Only time will tell, but I HOPE that Daenerys maintains her compassion and grace because those very traits are were set her leagues ahead of EVERY royal across the world.Â  Find out (those of you who didn’t watch the episodes that leaked last week) on an ALL new epsiode of Game of Thrones tonight at 9pm on HBO.