1984 isn’t just a phenomenal piece of literature by the late great George Orwell. It’s a year that falls into a decade full of highs, lows and a little in-between. I was in 4th grade, Regan was re-elected, THE COSBY SHOW debuts, The Supreme Court rules taping TV shows at home on VCRs does not violate copyright laws, and most importantly… Ivan Reitman’s spooky spectacle GHOSTBUSTERS is released. To this day I recall my dad and uncle (fans of SNL and stars Bill Murray and Dan Aykroyd) taking my brothers and I to watch it. As a 10-year-old I was drawn into a magical world that combined humor and horror. I enjoyed it to best of my childish abilities, and to this day remains one of my top films ever. (A list I’m currently compiling and will write about at some point.)

Five years later, the film (now franchise) sees its sequel’s release. A little less praised than its predecessor, GHOSTBUSTERS 2 had its it-factor within its template and original cast, but there was something about the script that didn’t really hit. However, it did whatever it had to do, and that seemed to be the end of it. For years after that Ivan Reitman kept pushing a third script that went floating around but due to The Four Horsemen unable to come to an agreement, it was left alone. And then, unfortunately, the world lost Harold.

Enter the 21st Century, (now as producer) Reitman’s itch continued only with a different outlook and along director Paul Feig steps up to the plate and reignites the spark for this comedy classic on ever seeing the light of day again – and boo! GHOSTBUSTERS makes its long-awaited return, rebooted with a cast of new characters. Thirty years after the beloved original franchise took the world by storm, Feig brings his upgraded take to the supernatural comedy, joined by some of the funniest actresses working today – Melissa McCarthy, Kristen Wiig, Kate McKinnon, and Leslie Jones.

Knowing The Four Horsemen will never, ever be duplicated (seriously, who can replace Dr. Venkman?), new characters were created and now hold this rehash’s torch. Abby (McCarthy) is the paranormal expert, she’s dedicated her life to studying ghosts. Erin (Wigg) is the physicist, who tries to bring a scientific understanding into it. Holtzmann (McKinnon), the engineer, can take the concepts that Abby and Erin come up with and actually build the physical equipment to fight them. And finally, Patty (Jones) joins the group of gals as the newcomer who knows the ins and outs of NYC, which will be one of the keys to solving where ghosts are and what’s happening throughout the city.

The flick is an entirely new story. A new team is answering the call now. It’s set during contemporary times. A world that has never seen ghosts that we can prove. Our Ghostbusters have dedicated their lives to scientifically proving they do exist, but they’re considered loonies, because there’s no physical evidence. But when they actually get to see the ghosts they’ve been trying to see their whole lives, it’s a whole different tune and adventure as they aim to prove that their whole mission wasn’t a waist.

For most, this rehash may have been a waist. Seriously, I’m not a fan of reboots any more than the other guy, but we all knew it was meant to be. I mean, this is what Hollywood’s been doing the last twenty years or so. Amidst the new golden goose (comic book movies), all Tinsel Town’s been doing is burping remake after remake, along with a handful of spinoffs, sprinkled with hit-or-miss artsy flicks and slave-based movies. which oddly enough always do well. It’s a hamster-wheel that keeps spinning without any remorse.

I totally get the “hate” for GHOSTBUSTERS, 2016. But honestly… Eh… I’ve seen worse. It’s no secret nothing will ever top the original. It was SO good, it’s one of the gems that took comedy movies by surprise and to this day remains solid! Paul Feig’s version, well, let’s just say it isn’t on the same level (obviously), as well as the complete antithesis among his stronger, edgy resume of comedies like BRIDEMAIDES (’11), THE HEAT (’13), and SPY (’15). Not that this was meant to mimic those titles. This is a different monster. His contemporary twist of silliness made GHOSTBUSTERS an ok watch in a Scooby-Doo’ish with a darker edge kind of way. Lots of gripes about it, but the cast makes it enjoyable and fun, as well as the cameos, including Slimer and the Stay Puffed Marshmallow Man. It made me appreciate the fact that respect and homage was paid to Reitman’s version. It’ll garner an appeal with the younger generation, but the die-hard, old-schoolers is where I see more than shades of grey when taking this in. Either way, it is what it is. I can’t say I hated it.

Question is… Will this spook its way into possible sequels? 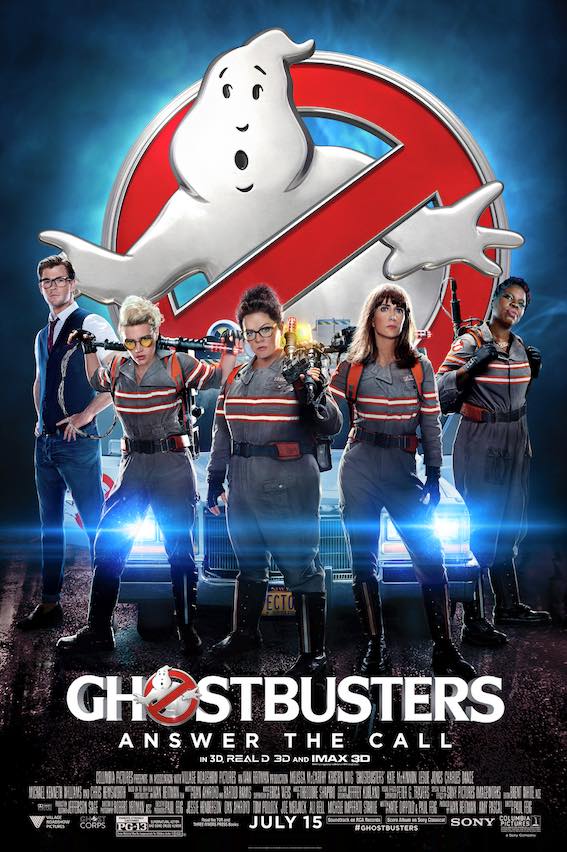