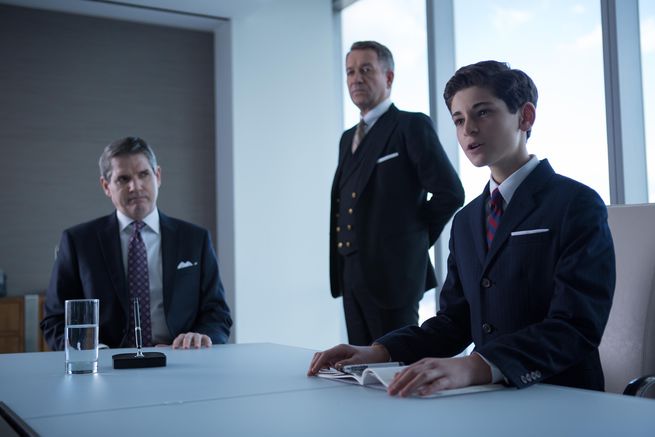 The circus comes to town as The Flying Grayson’s (a family of acrobats) makes their debut on the show.Â  Now if you’re not up on your Batman/Gotham mythology, know they are important because the as yet to be born littlest Grayson (Dick) will grow up to become Robin, the protege and sidekick of Bruce Wayne’s Batman.

Meanwhile Fish, having wasted no time securing herself a position of power, has inspired her fellow prisoners to follow her lead.Â  I’ve got to give it to Fish, held captive and yet even as a prisoner she’s managed to find a way to still be a #BossBitchÂ  Does this mean Fish Mooney is about to escape?Â  Is she preparing to make her way back to Gotham?Â  Just wait and see what she does next.

Elsewhere Barbara Keen finally returns and stumbles upon Selina Kyle and Ivy Pepper hiding out in her apartment.Â  Having pulled herself back together, she’s realized the error of her ways and has returned not just for Gotham but for Jim as well.Â  Will the blond bombshell manage to get back her man or is she just a little too late?Â  If I tell you there’d be no reason for you to tune in, so I won’t say a word except to say you’ll have to find that one out on your own.

The Grayson’s are not the only new faces in town as another iconic character makes his debut.Â  The boy who will one day become Batman’s deadliest nemesis makes his first appearance.Â  What did I think of him?Â  Let’s just say he’ll leave you with quite a chilling impression as to the darkness that lies ahead and he is NO joke.Â  Tune in for an all new episode of Gotham tonight at 8pm.