When the dynamic, filmmaking duo of The Wachowskis hits your radar, thereâ€™s no doubt the outcome is big. The art of epic scenery and brain-picking material have pretty much become their brand. Although convoluted, yet interesting and fun, from THE MATRIX Trilogy to CLOUD ATLAS, these two have the most creative minds when it comes to exposing a story. Theyâ€™ve left foot prints among Hollywoodâ€™s hills that will be pretty difficult to follow, and because of it have generated the love and respect from many across the globe.

At it again with an original piece of sci-fi thrills, JUPITER ASCENDING will go on record as another one of their babies thatâ€™ll stand out in many ways whether one likes it or not. 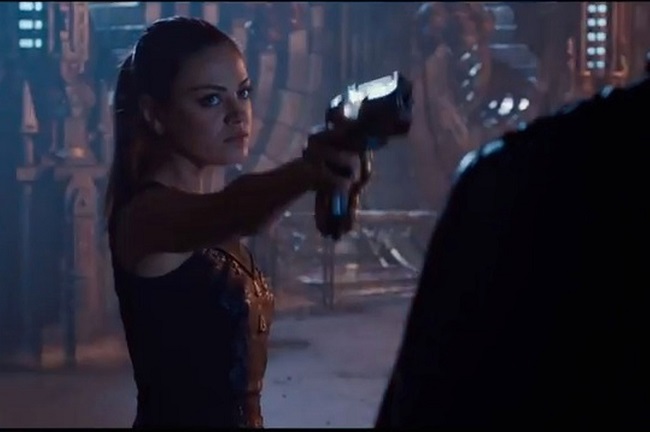 From the streets of Chicago to the far-flung galaxies whirling through space, the film tells the story of Jupiter Jones (Mila Kunis), who was born under a night sky, with signs predicting she was destined for greatness. Now an adult, Jupiter dreams of the stars but wakes up to the cold reality of a job cleaning other people’s houses and an endless run of bad breaks. Only when Caine (Channing Tatum), a genetically engineered ex-military hunter arrives on Earth to track her down, Jupiter begins to take a glimpse of the fate that has been waiting for her all along.

For starters, the best thing about JUPITER is and will always be its visuals. The art behind its scenery (along with a fantastic score), this film can hold its own weight. Big and loud in every way, the journey thatâ€™s encountered in this intergalactic joy-ride is one-of-a-kind in a STAR WARSâ€™ish kinda way. However, the characters, style, and overall realm within the world thatâ€™s being exposed is the genius that is The Wachowskis. At work with the beauty they always now how to portray, itâ€™s a hop-along between portals and planets with some of the strangest characters that come off like hybrids between species one would never, ever think of intertwining.

Ok, so, now that the idea of what it looks like is taken care of, the next question on what itâ€™s about is a bit more complex. Although simple at a glimpse, its plot is where JUPITER finds itself in an abnormal world of cinematic sinkholes as it runs along with two of Tinsel Townâ€™s hottest, but not brightest when it comes to chemistry or oozing anything that may give a sign of emotional distress considering all the chaos that goes on. So unlike THE MATRIX Trilogy, the connections among characters here is a bit off, and what sucks so much is how Eddie Redmayne finds his award-winning self tangled in this web of WTF!

Overall, itâ€™s not a bad movie. It has style, strength, and swag. The issue here isâ€¦ well, Iâ€™ve made that clear already. Go see for yourself!