Rumble in the jungle!

Per my press notes, King Kong was birthed by then revolutionary special effects artist Willis H. O’Brien and sculpted by Marcel Delgado. These brilliant souls were the heartbeat of Merian C. Cooper and Ernest B. Schoedack’s groundbreaking 1933 classic KING KONG – the original Beauty and the Beast. The adventurous piece swept millions of moviegoers across the world. It played to sold-out crowds and broke records throughout decades of re-releases and TV airings. The love and appreciation for this iconic monster has led to remakes, parodies, and spin-offs from cartoons to popular video games.

Here we are over eight decades out, and the mighty Kong is still holding his own. It’s no secret where this whole idea is headed. I mean, the MonsterVerse has been one of the most interesting and entertaining among all movie genres. King Kong, as an originator, seems to keep roaring within our conciseness and if there’s a following, monster moolah will be generated. Often imitated, never duplicated, the time has come to restore the crown of the greatest movie monster myth of all.

From the producers of 2014’s other MonsterVerse hit GODZILLA, KONG: SKULL ISLAND is directed by Jordan Vogt-Roberts from a screenplay by Dan Gilroy and Max Borenstein. Set in the early seventies while the Vietnam War echoes in the background, SKULL ISLAND tells the story of a diverse team of scientists, soldiers, and adventurers (led by John Goodman, Samuel L. Jackson, and Tom Hiddleston) uniting to explore a mythical, uncharted island in the Pacific, as dangerous as it is stunningly gorgeous. Cut off from everything they know (including civilization), the team ventures into the land of the mighty Kong, sparking the ultimate battle between man, beast, and uncontrollable nature. As the mission of discovery flips and morphs into one that entails survival, they fight to escape a primal existence in which humans do not belong.

Fast paced with roaring rage from start to finish, KONG: SKULL ISLAND does what it aims to do: generate a nostalgic, upgraded adrenaline rush to tease at an expanded monster mash! (No pun!) Although the narrative comes off generic with cliche chatter, while smothered in desensitizing, CGI overkill, it did present itself as new material. It stays within the confines of Kong, but in no way, shape, or fashion is this a remake. Its A-list cast helps carry the piece when the king isn’t around, but when he is… It’s JURASSIC PARK on roids, only Kong is King. It’s rough, loud, and gritty as it provides a little of everything for anyone who seeks out monster movies. Oh, yea. And before I forget… stick around after the credits. (You’re welcome!) 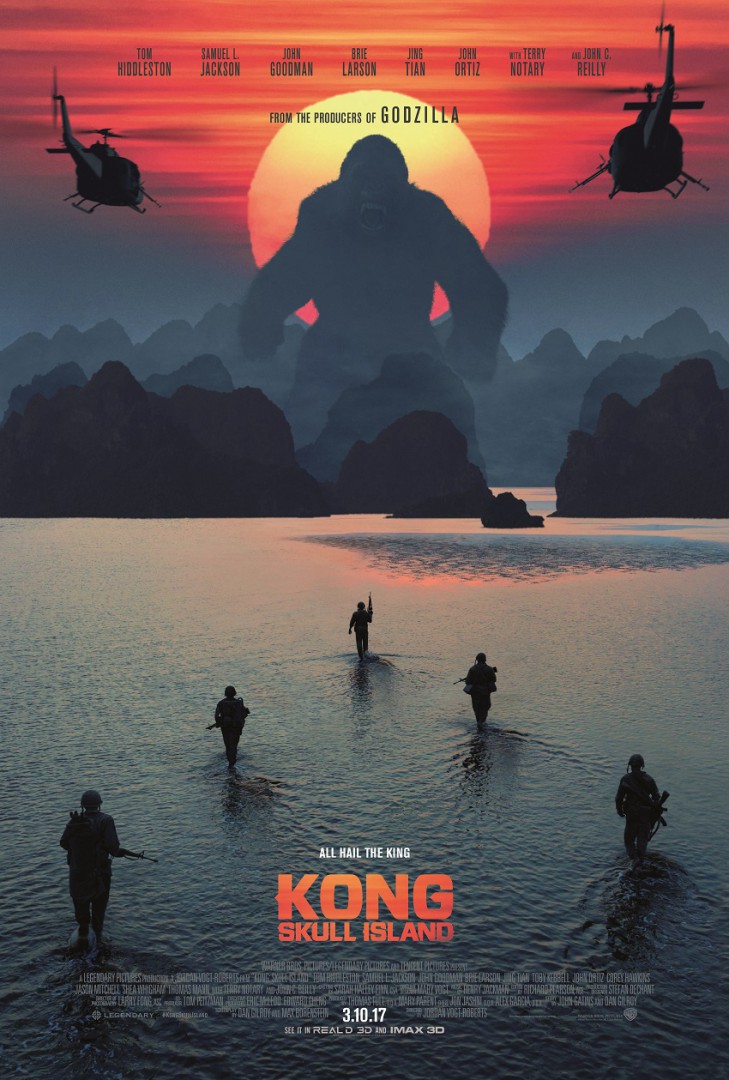