4 out of 5 Stars For the last couple of weeks, the streets have been buzzing with anticipation over the mixtape that places three New York City dj icons against each other. DJ Ted Smooth, GBo the Pro and Dj Rei Double R! While the history between these individuals has been documented by some and not known by others, I will say this – their history goes back to their childhood and there is real family business going on here with Ted Smooth and Dj Rei being actual blood brothers as well as the rise and fall of arguably the greatest NYC mixtape DJs in Gbo The Pro and Dj Rei Double R. So now you forward decades and the underlining tone as with hiphop itself to see who the “best” is, returns with these icons going out for each other to prove whoÂ really is the Best DJ out of them. In order to do this objectively, I think I need to break down each persons set as I hear it. Let’s begin with:

Well once you know the history between him and his brother dj Rei, Ted’s intro hits like a strong right hook to the jaw as soon as the bell rang. Reminiscent of how Tyson would charge when the bell was rung. His set was more of a “Look what I have done. Here is MY resume” With probably the best overall set on the mixtape, his cadence sets the pace quite nicely for this love and war mixtape. I did have some “ohhhhh, you did that mix” moments so that was great. Â I believe that those closely involved with this project or have a history of listening to these icons, would listen to the mixtape with a certain ear. Â His only flaw to me was the use of the 0 to 100 beat blended with Trinidadian. Â I wish he would have kept it more traditional.

With his years of doing “Way Back Wednesdays” we knew Gbo would come straight on the mixtape giving people the classic blend clinic. His choices of music on the mixtape was geared more towards the older crowd with cuts like Planet Rock, Apache and the “WTF, how did you even get that!!” moment on the whole mixtape with the Pedro Navaja Blend, GBo came with a solid set that true hiphop listeners would appreciate. The subtle blends and perfect timing only geared for true school hiphop aficionados. Â And AGAIN we got another Trinidadian remix. If my count is correct this was the Remix to the Remix that was originally a remix. #SoundsAboutRight

With probably the most to prove out of the trio; to himself that is, DJ Rei came super aggressive on his intro really staying true to those classic double r mixtape intro’s that were the cornerstone of that franchise. While his song selection lacked a certainÂ “Je ne sais quois” his never say quit attitude and perseverance shines through on that later part of his set with tracks “take it back Greg Nice” and after… thats when DJ Rei’s magic shines through. Â Totally enjoyable. 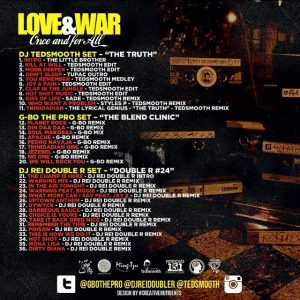 I don’t think I can pick an overall so I will do my personal categories. Â Don’t like it? well I don’t care! develop your own website, build a fan base then write your own review!

Why you do that blend (YUK): DJ Ted Smooth (Trinidadian) / DJ Rei – What more can I say

If I hear this beat one more damn time: Mobb Deep Shook ones bass line