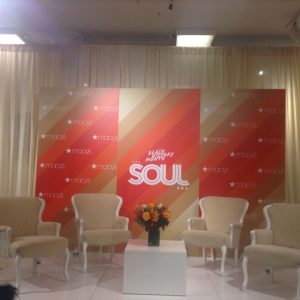 It was a night to remember with celebrating our past. A night that young and old could cherish forever. An era that not only built a movement, but led the careers of some of the greatest entertainers. The 70s was an era that unified the freedom of soul. Proudly being who you are and not changing your image because of society’s portrayal. A style that is often imitated, but can never be duplicated.
In honor of Black History Month, Macy’s celebrated the Style of Soul Era. The panel discussion hosted by TV Personality Jacque Reid and designers Stephen Burrows, June Ambrose and Johnetta Boone discussed the evolution of soul. Stephen broke barriers for being the first African American International Designer. This fearless and risky designer stood out with having an all African American runway show. June is a celebrity stylist/designer who had a successful Vh1 reality show and HSN clothing line. Johnetta is a Hollywood costume designer well known for the Notebook. The panel discussion was worth watching as attendees flocked to their seats or stood to listen. The audience had an earful with funny moments as the panelists discussed their favorite moments from the era. Memories were shared about receiving their start in the industry.
One of the highlights of the evening were the audience questions. Many were eager to ask due to growing up in the era or receiving advice on starting their career. Most of the panelists shared the same thoughts as funding and networking were major factors of career moves. Devising a plan and making sure you have a back up leads to success. Besides career advice, the marketing of fashion was a major concern. Several attendees were concerned about the lack of clothes that women are wearing and the curb appeal for plus size. The fashion we currently have is nothing compared to the 70s. Women were able to dress sexy, but classy without revealing too much. The style was bold without having to say much.
“Wear fabrications that enhance your silhouette” -Johnetta Boone
Event Pics