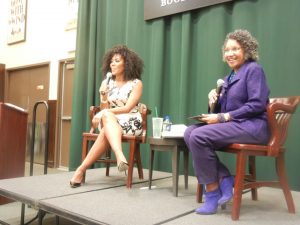 The room was packed at Barnes and Nobles Tribeca with guests waiting to see Miss Jessieâ€™s Co-Founder Miko Branch. Many came to the book tour to not only show support to Miko, but provide outstanding love in memory of her late sister and business partner Titi Branch (passed away December 2014). Miko and Titi Branch are not only sisters/natural hair gurus, but authors of Miss Jessieâ€™s: Creating a Successful Business from Scratch ($14.99). The book, which recently launched is a memoir and business guide for all aspirations. As Miko and Host/ABC Executive Producer/Author Aâ€™Lelia Bundles hit the stage, it was nothing, but big smiles and cheers across the room. Before the discussion began, Miko first gave a heartfelt thank you to everyone in the room that has shown support since the passing of Titi. She made many acknowledgements including receiving flowers and cards. Mikoâ€™s father and son were in the audience as she shared this special moment. She held her composure as she shared some thoughts on her sister.

Shortly after, the discussion began with the makings of Miss Jessieâ€™s. Miko gave us a history on her family roots, which stemmed from her grandmother being a business owner. Miko and Titi grew up with their parents and grandmother in Queens, NY. Their father was a Real Estate Broker who put himself and their mother (an Artist) through school. During this time, they observed a lot and saw the mechanisms of what it takes to strive. Their father put them to work at a very young age. Miko thanked her father a lot because his insight and strict upbringing helped develop his daughters into business savvy. Often curious, they took what they learned from their family and began creating their business. Common sense was a major factor and most often used by the sistersâ€™ grandmother that helped correct their mistakes and established their brand. They had a lot of trial and error including consequences that led to owing the IRS. Being new business owners, Miko and Titi were unaware that their third business partner was the IRS. They mistakenly thought their profits were split only amongst them 50/50. However, they later found out that 45 percent of their share goes to IRS, which led them to owe $17, 000.

After having much success with opening a hair salon in a Bed Stuy Brownstone, they were setback due to financial loss. This didnâ€™t stop Miko and Titi from fulfilling their dreams. They continued brainstorming and advertising ways of bringing customers and building Miss Jessieâ€™s. The brownstone was a place of many including their living headquarters. At the time of their biggest struggles, Miko was a single parent to her toddler son and didnâ€™t see any other obstacle. She knew her and Titi had to keep fighting to make ends meet. During this time, they started creating their hair products based off of their grandmotherâ€™s love for food. Once the icing was on the cake, the rest was history. Most of the discussion was based on the start of Miss Jessieâ€™s and tips on building a business. The audience were able to ask questions, which also shed light on Titiâ€™s untimely death. Her death hasnâ€™t really been discussed since tragically passing from suicide due to mental illness. It is a very sensitive subject, but one Miko is now willing to speak about. The Branch family is steadily learning about mental illness and becoming more aware of the cause. Cosmetology school may have helped with their license, but the school of hard knocks is what developed a multi-million dollar business.