"Once upon a time recap: Season 4 Episode #13 – Darkness on the Edge of Town" 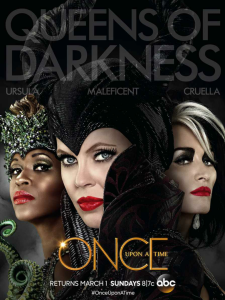 Rumple rumple rumple you’re still causing trouble! Rumpelstilskin/Mr. Gold, banished from Storybrooke by his wife Belle (Beauty and the Beast) after uncovering his betrayal, reaches out to three of the worst villains in fairytale history. Those villains? Sleeping Beauty’s Maleficent (Kristin Bauer von Straten) The Little Mermaid’s Ursula (Merrin Dungey) and Cruella de Vil (Victoria Smurfit) from 101 Dalmatians. Rumple it seems shares history with these Queens of Darkness and it’s not at all a pleasant one. As the epsiode unfolds we get to witness that history (pay close attention to Cruella because the show has done something with her I hadn’t expected) as the show often does with flashback sequences to fill in the blanks of it’s character’s history. We learn Rumple had convinced the ladies to help him acquire an item only to leave them high and dry fending for themselves. So what makes him think they would join him now?

For starters they possess no magic/power in our world are just mere humans. His goal is to first get back into Storybrooke (where magic exist) then get what villains have always desired, to finally win and get their happy endings. We find Mr. Gold living with Ursula, who in our reality is a normal woman working at an aquarium (figures she’d somehow still have ties to water). She was the first of the queens that he located and has been staying with. Alas he finally tracked down the next of the queens and we meet Cruella, still wealthy (would she be anything else?) and convinces her to join their unholy cause as the trio set out to Storybrooke.

Back in Storybrooke our heroes have found a way to release the fairies from the sorcerer’s hat (you know the same one Mickey Mouse wears in Fantasia) that Rumple used to trap them with earlier in the season. The hat can harness magic from any who possess it. What they didn’t realize is that a dark creature was also trapped within the hat. The Chernobog is an ancient demon that seeks out the heart with the greatest potential of darkness and feeds off that evil. Ursula and Cruella ask for entrance into Storybrooke and profess that they have followed in Regina’s footsteps and have gone good. Our heroes aren’t so sure they should let them in, so as a sign of good faith offer assistance in defeating the Chernobog. Emma and Regina decide the ladies have proven themselves true and grant them entry into Storybrooke.

We learn from Blue Fairy that the author of fairytales and the sorcerer that both Rumpelstilskin and Regina are seeking are not the same but two different people. Ok this search has just gotten twice as complicated now. GOOD luck to Regina and #TeamHeroes because of if Rumple and #TeamVillains finds the author or sorcerer first then we’re ALL doomed!
The epsidoe closes out with Snow White and Prince Charming meeting with Ursula and Cruella in secret. Apparently they all know each other and something happened long ago in enchanted forest. So what is it that Snow White and Prince Charming are keeping and WHY do Ursula and Cruella of all people know what it is? Something tells me that we’re definitely NOT going to like the answer to this one. A new episode of Once upon a time airs tonight at 8pm on ABC.