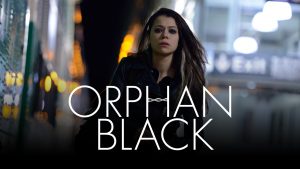 Have you been watching the HIT BBC sci-fi series Orphan Black?Â  If ANY of you said no then SHAME on you!Â  Hell I’m one to talk being that I JUST got around to watching the first two seasons about 3 weekends ago.Â  LMFAO.Â  Now what we’re Sarah (Tatiana Maslany) and the Clone Club upto this past weekend?

Sarah (Special Clone) and brother Felix (Jordan Gavaris) were left to dispose of the body after Rudy (Scarface Clone) killed Seth (Mustache Clone).Â  Detective Arthur Bell (Kevin Hanchard) stops by with a lead on Mark (Religious Clone) only to find out about Seth.Â  THANK God he knows nearly the whole clone situation because he keeps silent to help Sarah and her sisters.Â  The lead happens to be a midwife that was part of the Promethean cult.Â  She informs Sarah and Art that the late Henrik “Hank” Johanssen (Peter Outerbridge) had Helena’s eggs harvested and impregnated her with his child.Â  She also tells them that Henrik also had his daughter Grace (Zoe de Grand’Maison) impregnated with Helena’s eggs and that she too is with child.

As Helena (Wildling Clone) continues to undergo torture tests by the military, she keeps talking to her imaginary friend which happens to be a scorpion (I KID you not LOL) while waiting things out looking/hoping for an opening that will allow her to escape and reunite with her sisters.Â  She’s already made threats that once she gets free she’s going to kill EVERYONE at the facility she’s being held out.Â  If you’ve been watching the show then you’re familiar with Helena and KNOW that she makes good on her threats.Â  I for one can’t WAIT because just about everyone there needs to get a capped BUSTED in their ass.Â  Keep the faith and eye on the prize Helena, your sisters are haven’t forgotten about you mama!

Meanwhile Alison (Soccer Mom Clone) and husband Donnie (Kristian Brunn) were serious about taking over the business from Ali’s former drug dealer.Â  As the Hendrix’s open up shop business gets BOOMING and the couple decides to use their new joint ventute to influence votes in Alison’s favor as she decides to run for school trustee.Â  This storyline is HILARIOUS and watching Alison go from straight arrow housewife to undercover drug dealer is DELICIOUSLY good tv!Â  MAKE that money Ali baby!

Cosima (Brainy Clone) with help from Scott Smith (Josh Vokey) examines Seth’s brain and discovers that the male clones are not just brothers, but also related to the female clones. Reve-fucking-lation!Â  It seems the examination uncovered that the female clones and the male clones were cloned after siblings which means that the sisters now have brothers too.Â  So this whole time the sisters have been hunted by their brothers?Â  And I thought I had problems with my siblings!Â  Well the plot just got THICKER and MORE COMPLICATED!Â  Tune in tonight at 9pm for an ALL new episode of Orphan Black.