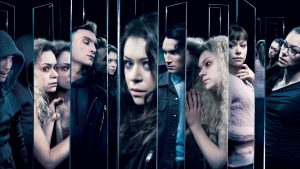 Sibling bonding, drug dealer sitdowns and freedom on the horizon are just some of the things that took place on last week’s episode of Orphan Black.Â  I’m ready to discuss are you?Â  Then let’s go!

It seems these days the clones are a little harder to kill then we anticipated as Mark (Religious Clone) is still breathing.Â  Say what?Â  But wasn’t he shot last week by Grace’s mom?Â  He was, but it seems she didn’t shoot him in the head as we all thought.Â  Thanks to help from Sarah (Tatiana Maslany) Mark (Ari Millen) is dragged to safety and may yet see another day.Â  His newlywed wife Grace (Zoe de Grand’Maison) who now knows some of the truth and has gone back to her mother.Â  Young Gracie is having pregancy complications and as it turns it wasn’t meant to be as she miscarried the child she was carrying.Â  GOOD because the LAST thing we need is a clone baby out there in the world being raised by yet another devious party!Â  Brother Rudy (Scarface Clone) tracks down Mark only to end up finding Sarah with him which doesn’t end well for Sarah.Â  She ends up becoming a prisoner and taken to where Helena is being held.Â  DAMMIT!Â  Atleast she now knows where Helena is.

Helena (Wildling Clone) ever the resourceful lioness inflicts self injury.Â  Huh?Â  No worries my pets because it’s all part of Helena’s plan.Â  She was given a sedative and taken out of her cell to recieve medical treatment, but what her captors hadn’t anticipated was Helena tying cloth around her arm to slow down the sedative from taking effect.Â  With no guards nearby she sneaks out in hopes of finding a way to escape.Â  She locates an exit before falling unconscious, but luckily comes to and makes it back before anyone has noticed she was gone.Â  With a makeshift lock pick she fashioned out of bone (she’s like Tarzan’s long lost sister LOL) she picks the lock on her cell and make her escape only to come across another male clone.Â  This clone is strapped to a chair with the top of his skull cut off and his brain exposed.Â  Begging for his suffering to be over, Helena stabs him in the brain before being taken captive again.Â  DAMMIT 2X!Â  Come on ladies the guys are kicking your assess and it’s about TIME you all start kicking back!

Alison (Soccer Mom Clone) and husband Donnie (Kristian Brunn) run in to unexpected business trouble when a strange man shows up at their home.Â  As it turns out the goods that Ramone (Ali’s old dealer) sold the Hendrix’s weren’t his goods to sell and now the stranger’s boss is demanding a sit down with the suburban couple.Â  So what did the sit down entail?Â  The boss wanted to speak to Alison alone and we learn that they have history (they dated back in high school).Â  After catching up Jason Kellerman (Ali’s ex) decides to go into business with the Hendrix’s and allow the couple to continue dealing.Â  An all new episode of Orphan Black airs tonight at 9pm, check your local listings to see what channel your cable provider airs the show on.