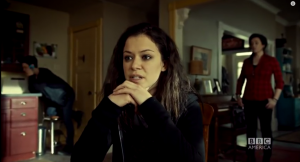 The introduction of a new sister clone, the good doctor’s secret book revealed, Helena does a little family bonding and an unexpected clone swap that nobody saw coming!Â  Just another typical week in the world of Orphan Black.Â  Let’s talk about episode #8 shall we?

Alison Hendrix (Soccer Mom Clone) and husband Donnie (Kristian Brunn) take in Helena (Wildling Clone) as it’s their turn to look after her.Â  Despite her wildness and affinity for violence, Helena is actually good with children and a better person when in the company of her sisters.Â  She bonds with Ali’s daughter and even has a tender moment with Donnie (it’s the cutest thing).Â  Ali’s ex and business partner Jason still has a thing for her which Donnie picks up on.Â  Jason recieves a text from Ali’s phone asking him to meet her and is caught off guard when he runs into Donnie who had actually sent the text.Â  He tries once and for all to put Jason in his place (even punches him in the face) but Donnie is no fighter and soon has his ass handed to him.Â  I UNDERSTAND where Donnie is coming from, but considering he can’t fight and that Jason is a real deal drug dealer WHY did he think this was was a good idea?Â  Your heart was in the right place but choose wiser next time Don.

Earlier in the season a new clone popped up on the radar thanks to Seth and Rudy who were caught on camera attempting to kidnap her.Â  As it turns out that video footage wasn’t the last we’d see of CrystalÂ Goderich (Beauty Clone) as Delphine (Evelyne Brochu) and Topside have been keeping tabs on her.Â  Scott Smith (Josh Vokey) and Cosima (Brainy Clone) have shown the book to Rachel Duncan (Executive Bitch Clone) who starts to decipher the code.Â  In exchange for helping Sarah (Special Clone) and the others Rachel wants to be freed from the Dyad Institute as she fears Delphine will have her killed.Â  In an unseen twist of events Rachel pulls a wammy as she (with the help of a doctor at the Dyad Institute) not only switches places with Crystal but also left back home to London where she’s having surgery to have a prosthetic eye put in.Â  Now exactly what this bitch has planned is anybody’s guest, but I have a feeling that it’s not gonna be good and that she might lash out against her sister clones as retaliation for her injury.