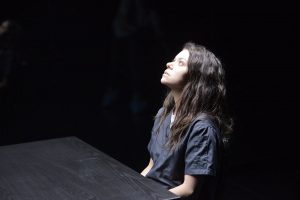 Episode #9 sees the fallout from the week before as Donnie’s actions cause a hiccup in the business relationship between the Hendrix’s and Jason.Â  No longer cool with Donnie for the stunt he pulled, Jason no longer vouches for him and so their supplier wants his product back from the Hendrix’s.Â  The supplier sends one of his goons to retrieve the drugs, but they weren’t being kept at the store.Â  The goon finds and takes the frozen nitrogen tank that Helena hid at the soap store the week before (if you’ve been watching then you know the tank contains the eggs that were harvested from Helena earlier this season).Â  When Helena gets wind that her tank was taken she is READY to kick ass, but Donnie persuades her to back down and that he’ll handle it.Â Â  But come on exactly WHAT are you gonna do Donnie, reason with a mobster?Â  If Helena knows anything it’s bad people and that you can’t reason with them.Â  They manage to get back the cannister but upon leaving learn the mobster has NO plans of reimbursing the money they spent on the drugs, warning the Hendrix’s to stay out of the drug game and go so far as to threaten the lives of their children.Â  BAD move because this angers Helena who sends Donnie out with the cannister before locking the door behind him.Â  Helena emerges a short time later covered in blood and with a bag full of money that more then compensates the Hendrix’s for their loss.Â  I just LOVE Helena!

Cosima goes over the file on Shay (Ksenia Solo) that Delphine gave her which she hopes will convince her that her new girlfriend is the mole that Castor used to get Doctor Duncan’s code.Â  Cosima struggles to believe Delphine, but things have not been adding up which makes Cosima think Delphine could be right.Â  Speaking of Delphine, she decides to take matters into her own hands and brings a small security detail with her as she pays Shay a visit.Â  One way or another Delphine intends to get the truth out of her and if she won’t listen to reason then maybe she’ll be more receptive to torture.Â  But JUST as Delphine is about to go dark Cosima calls to reveal that the mole is not Shay but in fact Grace (Zoe de Grand’Maison) who’s been in contact with Castor and promised she’d be reunited with Mark (Religious Clone) if she helped them.Â  Well they made good on their word and Gracie was indeed brought back together with Mark.Â  And to think I had started to like that little bitch!

Elsewhere Sarah, Felix and Mrs. S are in London attempting to track down the Castor original.Â  They start by meeting up with some of S’s old contacts, but as they begin the searchÂ  Ferdinand (the cleaner from Topside who secretly was Rachel’s lover) and his lackey are aware they’re in town and monitoring their movements.Â  S’s friend Terrence calls with a lead, but finds Ferdinand and his goon waiting for him at home.Â  Seems they know each other and Ferdinand thought he had an understanding with Terrence and that he would be notified if S ever came back to town, but it seems Terrence’s loyalty to S is stronger then Ferdinand realized and so he has him tortured.Â  S, Sarah and Felix arrive to find Terrence bloody and beaten.Â  Terrence dies but not before whispering something to S before dying, who orders Sarah and Felix to leave so that she can stay to handle the body.

Upon leaving Sarah stumbles upon a phoneÂ  belonging to Terrence which she uses to track down Terrence’s people in hopes of learning what Terrence had found.Â  They’re given a time and location to meet and then picked up by a driver and dropped off at another location and told that whatever they’re looking for is inside.Â  Felix stands on watch as Sarah enters, but what she hadn’t planned was finding an old woman inside.Â  The woman as it turns out knows S all to well because as it turns out she happens to be S’s mother.Â  The episode ends with S’s mom telling them she was a twin, but absorbed her male twin in the womb when she was formed which caused her to have 2 different cell lines.Â  So exactly WHAT is she sayng?Â  S’s mom is the Castor original they’ve been looking for all along.Â  WTF?Â  I said the EXACT same thing when it was revealed!Â  That’s everything you need to know to catch you up before tonight which is the season 3 finale. Orphan Black airs tonight at 9pm, check your local listings for channel information.