"“Our Latin Thing” by SummerStage went down at Crotona Park in the Bronx June 24th 2014 – See what Happened!" 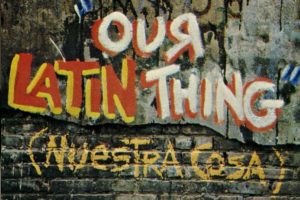 On one August evening in the 1970’s New York gave birth to a sound that would change the face of Latin music forever. At the renown Cheetah Nightclub, there was an ensemble of artists got together for what became a magical evening of music. The show was billed as “Our Latin Thing”. In the decades ahead those all-star musicians would become the ambassadors and juggernauts of Latin Music around the world. They became the musical reflection of the times, needs, and struggles of New York’s Latino community. Their music was “Salsa Gorda,” influenced by American Jazz, Soul, and Rock and Roll. Their music became part of Americana. Currently billed as “Our Latin Thing”, the group performs as an assortment of this music’s top hits. This Musical/Theatrical like revue, will take the audience on a musical poetic journey. Re-Live the music, re-live the times, re-live the magic….This is “Our Latin Thing.”

Imagine a hot salsa band from the 1960s reuniting after a 30-year hiatus to discover an even greater, more global, fan base. A product of New York City and the excitement and turbulence of the sixties, the New Swing Sextet made its professional debut performing in the Singer Bowl at the last New York World’s Fair in 1965. The band has been a popular and innovative exponent of Latin jazz, salsa and pop music for over four decades. With a long history of making music on the streets of Latin New York through harmonized vocals, piano, vibes, bass and Latin percussion, NSS recorded the last of 4 albums, all under the Cotique label, in 1970 and broke up in the late seventies.

Today, the New Swing Sextet returns under the Emusica/Fania family of labels with â€œBack on the Streets…a taste of Spanish Harlem Vol 2â€ which has just been nominated for a Grammy Award by the Recording Academy. The band offers the classic Latin New York sound of another era, perfectly preserved and bottled for todayâ€™s global salsa enthusiasts. The New Swing Sextet features George Rodriguez on vibes and vocals; Angel Justiniano on vocals and conga drums; his younger brother Harry Justiniano on bass and vocals; Tomas Martin Lopez on bongos, timbales, misc. percussion and vocals; Hector Ortiz on timbales and bongos; Joe Mannozzi on piano and the singing of Jose â€œCheoâ€ Medina on lead vocals.

You can also get a free salsa lesson from Zulma Rodriguez. Zulma is a professional dancer who has competed, performed and continues to teach dance. Her background includes Jazz, Ballroom, Hustle, and Salsa On1 and On2. Join Zulma at 6:00pm for a Salsa lesson that will teach basic steps, patterns and combinations, as well as how to connect beginner and intermediate Salsa On2 dance moves into a fun simple combination.

George Rodriguez on vibes and vocals;
Angel Justiniano on vocals and conga drums;
Harry Justiniano on bass and vocals;
Tomas Martin Lopez on bongos, timbales, misc. percussion and vocals;
Hector Ortiz on timbales and bongos;
Joe Mannozzi on piano and the singing of
Jose â€œCheoâ€ Medina on lead vocals.

All images and Video taken by: Ernesto “Tic” Morales