"Power recap: Season 2 Episode #2 – No friends on the Street" 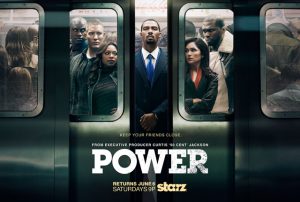 So what did Ghost do with the info Tommy gave him about Angela?Â  That whipped mofo waxed that ass yet again and spent the night instead of cutting ties or going gangster and killing her ass.Â  Angela (Lela Loren) gets up in the morning and goes for a run, but Jamie (Omari Hardwick) is unsure how much to trust her so he follows her and sees her meeting up with a man wearing a Quantico sweatshirt which he identifies as FBI.Â  He’s unsure what their meet up was about and still on the fence about whether to keep her or cut her loose.Â  The man is in love and can’t rationalize between his head and his heart.Â  Loose cannon Tommy (Joseph Sikora) is over the moon now that Holly ( Lucy Walters ) has been discharged from the hospital.Â  Tommy has her at his place where he’s been looking after her, but has to put her in her place after learning that she called Jamie Ghost at the club right before she was shot.Â  Ghost looks to Tasha (Naturi Naughton) and encourages her to reach out to Holly and make her feel like she’s a welcomed part of the family.

Meanwhile Ghost and Tommy have bitten off a little more then they can chew as they’re struggling to move the extra drugs they’ve taken on to compensate the loss due to Truth being closed.Â  Tommy reaches out to the Serbs but they won’t make a move against their connect who they’re afraid of (the man apparently is a cannibal).Â  Julio reaches out to the Taino’s who shuts him down telling him they’re gonna find another cartel to do business with because there’s too much heat around Ghost and his people.Â  Ruiz (Luis Antonio Ramos) and his crew are the only ones still onboard.Â  Tommy puts Ruiz’sÂ loyalty (which was made permanent after Tommy killed Nomar) by asking Ruiz to make peace with Q-Dubs and the RSK’s.Â  The peace would in turn benefit the operation and help things run smoothly.Â  And they say drug dealers can’t organize or have smart ideas?Â  LOL

Circling back to Truth, Jamie learned last week that Simon (Victor Garber) bought the building that the club calls home.Â  To add insult to injury Simon named Kantos (Adam Huss) the new general manager who Jamie now must report to.Â  Simon still wants Truth as his own and continues to make headway in getting what he wants (even telling Kantos to make sure Truth doesn’t prosper enough for Jamie to me enough money to buy the club back from him).Â  Simon wants Jamie to go to Miami to get some contracts signed, but what starts as just a business trip becomes a blessing in disguise as Ghost learns that Pink Sneakers was spotted in Miami.Â  Ghost intends to take out the hit woman himself and uses the business trip as the perfect cover.Â  The epsiode ends with Angela surprising Jamie at the airport to accompany him on the trip.Â  HOW in the hell is he supposed to take out the bitch that tried to kill him with Angela there in Miami with him?Â  I’m sure Ghost will find a way to kill two birds with one stone.Â  Tune in tonight at 9pm on Starz for an ALL new episode of Power and check your local listings for channel information