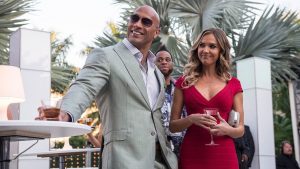 The party of the season, client wooing and the origins of the word mother fucker?Â  That pretty much sums up what happened last week on HBO’s new hit series Ballers.Â  Here’s what you need to know before tonight’s all new epsiode.

Spencer Strasmore (Dwayne Johnson) and Joe (Rob Corddry) are throwing a corporate event in hopes of enticing high income athletes to sign with their agency.Â  Amoung their many attending is the big fish Spence has been after since the start of the series, Vernon Littlefield (Donavon W Carter), the player Spence gave a 300k loan to in good faith hoping to sway him into signing with him.Â  Unfortunately Vernon’s childhood friend Reggie (London Brown) continues to run interference which is stalling Spence’s plans.Â  In all seriousness Spence or someone NEEDS to sit this mofo down.Â  He’s already messed up his finances (which is how the loan from Spence came to be), does he want to mess up Vernon’s career too?

Meamwhile Ricky Jerret (John David Washington) continues to get the “rookie” treatment now that he plays for the Dolphins, butÂ teammate Alonzo Cooley (Antoine Harris) continues to rub him the wrong way.Â  The latest stunt is placing all of Ricky’s personal belongings in the cold tub which sets Ricky off.Â  Let’s just say I’ve never seen anyone eat a pair of Jordans.Â  LOL.Â  Karma does have a way of paying people back as Ricky is unknowingly giving his beef sausage to Alonzo’s attractive and young looking mother.Â  Now is this where the term mother fucker comes from?Â  LMFAO.Â  Karma swings back Ricky’s way though when local sportscaster Tracy Legette (Arielle Kebbel) gets hold of an image of Alonzo’s mother sitting on Ricky’s lap.Â  She’s eager to break the story, but brings it to Spence’s attention who advises Ricky to kill off the romance because it could potentially derail his career.Â  LISTEN to Spence because the man has both yours and his BEST interest in mind.

In other Ballers related news, it seems the fans and HBO have spoken because the series (fourth epsiode of the season airs tonight) was renewed earlier this week.Â  GREAT news for executive producers Dwayne Johnson and Mark Wahlberg who CONTINUE to branch out and succeed in pretty much everything they do.Â  Take a bow gentlemen because this show was a well played gamble that paid off handsomely.Â  My ONLY issue with the series is that it’s only 30 minutes which is NOT nearly enough time to give viewers or the show the full justice is warrants.Â  My HOPE is that for season 2 the show is expanded to a one hour dramedy, but that’s wishful thinking on my part.Â  Suit up and get your cleats on because Ballers takes the field at 9pm with an all new epsiode on HBO.