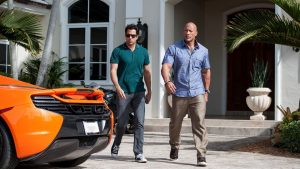 It seems Spencer Strasmore (Dwayne Johnson) has rekindled an old flame as his ex and local sportscaster Tracy Legette (Arielle Kebbel) seem to be back on again.Â  She’s cute and I like him for her so I’m curious to see where it goes.Â  Spence and JasonÂ  (Troy Garity) continue to play ball attempting to get Vernon Littlefield (Donavon W. Carter) a better contract, but once again his boy Reggie (London Brown) not only continues to cause problems but feels the price the guys are trying to get for Vernon isn’t good enough.Â  The man is a good player but he’s not the best for Reggie to think they can get 100+ million so somebody needs to sit that mofo D.O.W.N.!!!

Spence’s buddy Joe (Rob Corddry) was drunk sleep on the yacht the guys borrowed for their corporate event.Â  He was supposed to return the yacht, but ends up high jacking it for an unexpected second party.Â  The high jacking may prove fruitful as NFL players Victor Cruz and Lamarr Woodley showed up.Â  Leave it to Joe to NOT waste a good opportunity as he manages to score a meeting with Cruz who is one HELL of a player as well as sponsor GOLD with his off the feel charisma and all around good guy persona.Â  GET IT JOE!!!

Meanwhile Charles Greane (Omar Miller) apparently met an alluring woman at the party and apparently he musta made one HELL of an impression because she managed to get his number.Â  She sends him a picture of her in her bra and panties and foes her best playful kitten flirt routine.Â  Now how in the hell did she get his number?Â  Charles has Ricky to thank who thought he was paying it forward to a good friend.Â  The kind gesture may prove bad as Charles is entertaining the thought visiting the young lady for some adult fun, but will he honor his vows and stand by his wife or allow temptation to creep into his life?

Speaking of Ricky Jerret (John David Washington), he decided to take Spence’s advice and break things off with his teammates mom.Â  He thought it would square things between he and Alonzo and had assumed that was the case before practice.Â  Well he thought wrong because after practice he finds his car missing from his parking spot.Â  He’s given the information to where his car is and upon arrival finds her white ferrari resting comfortably upon bricks as all it’s tires are missing.Â  Now if Ricky whoops Alonzo’s ass I would NOT blame him.Â  Unfortunately he’s got to play nice and not give the team ANY reason to think they made a mistake signing him.